Last year, Hearing Like Me interviewed deaf Neighbours’ actor Nathan Borg. At the time, he was about to start the role of teacher Curtis Perkins on the Australian soap, Neighbours. After 37 years on Australian and UK screens, the show is ending this August. We followed up with Borg to get an update on his life, the show, and his future. 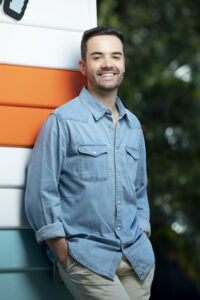 Deaf Neighbours’ actor Nathan Borg was the first actor on Australian television with cochlear implants. He was also the first deaf performer to appear on the soap. The 24-year-old actor speaks and he is also learning AUSLAN (Australian Sign Language).

According to Borg, breaking into the industry is the same regardless of hearing loss. “The difference is that the limitation that happens in the industry is with diversity and young castings in Australia,” he said. “But it seems to be improving, which is great.“

Being on Neighbours was ‘super fun’ yet challenging in the beginning, Borg said.

Read more: An interview with actor Nathan Borg of ‘Neighbors’

Neighbours aired first in Australia, and then in the UK. Currently in the UK, a hearing loss storyline is airing – one that is exciting and one often not seen on screen. It revolves around a character named Shannon Laing. She is experiencing hearing loss and looking into hearing aids. Borg said it was challenging for him as an actor because he didn’t experience hearing loss in a conscious sense of awareness as he received a cochlear implant at age two.

“Curtis was the perfect and smart person to have to help navigate Shannon through her hearing loss,” he said.

Borg also loved the fact that his character got to have a romantic storyline with character Jesse Porter, even if it was short-lived. He said playing a deaf, gay character was refreshing.

“I felt that Curtis had enjoyed being in Jesse’s company, but it did sadly end up in a physical fight so quickly,” Borg said. “I definitely would have loved to have seen Curtis blossom into another romance storyline with another man. It definitely would’ve been great and hilarious if it was with Mick Allsop or if he got in the middle of Aaron and David’s relationship to add some soap drama!”

Borg says he hopes that bringing the character of Curtis to television has increased deaf awareness across Australia. He is grateful to have been a part of a show that  thrived with storylines set firmly in the modern world. He even had a role in interjecting deafness into the show.

“I got to create some deaf elements into his stories, which was super fun and important,” he said. “I really have enjoyed the elements where he turned off his cochlear implant to avoid his Aunty or had made jokes through his deafness with Jane. There was a specific major moment that happened for Curtis where his cochlear implant broke during the break-in at The Hive, which was Curtis’s biggest falling moment. In that story, I did enjoy exploring his struggles of communication and not being able to hear Jane and Levi. “

“I got to create some deaf elements into his stories, which was super fun and important.”

Borg is already looking for the next opportunity. In the meantime, he has been working on small projects and auditions. He is also doing his part to improve accessibility. 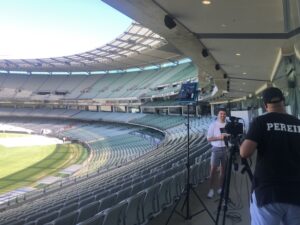 “Whilst I am grinding for that next big gig, I am working with Deaf companies to create more Deaf events, accessibility and getting Auslan into our education in Melbourne.” he said. “I have recently wrapped up on a TikTok LGBTQIA+ series and a gig with AFL (Australian Football League). These haven’t been released on my platform but are coming soon.”