An interview with actor Nathan Borg of “Neighbours”

If you watch soap operas in Australia or the UK you will no doubt be familiar with the Australian soap “Neighbours.”

The show, which has been running since 1985, explores the lives and relationships of the residents of Ramsay Street in Erinsborough. Recently, the day before the International Day of People with Disability — which was December 3 — the show announced that hard of hearing actor Nathan Borg would be joining the soap in a guest role – becoming the first actor on Australian TV to wear a cochlear implant.

We talked to Nathan Borg about his life with hearing loss and his career as an actor.

Hard of hearing actor Nathan Borg will be joining the long-running soap opera, which has been on the air since 1985 when it debuted in Australia. It was picked up the following year by the UK’s BBC1, which broadcast it for 21 years. It then moved to channel 5 in 2008. Famous names have appeared on the show over the years, including Kylie Minogue, Jason Donovan, and Natalie Imbruglia.

Now Borg will play new teacher, Curtis Perkins, making his debut in episode 8546, which will air in the UK in early 2021. He will be featured alongside characters Susan Kennedy and Jane Harris, played by soap legends Jackie Woodburne and Annie Jones.

HLM recently spoke with Borg about his big break and learned more about his story. 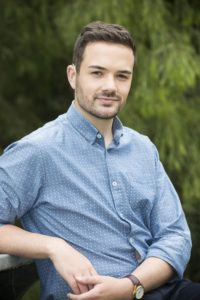 Borg: My childhood involved a lot of speech therapy, so I spent a lot of my time at the Eye & Ear Hospital in Melbourne. I had the “1997 SPrint Speech Processor,” which wasn’t exactly the lightest device to wear as a kid. It created some obstacles when doing physical activities. My mum would have to sew pockets onto my tees or make shoulder straps so I could wear my cochlear implant. In primary school, kids always accepted me as me and never questioned my disability. I always had great support from my family. My sisters always treated me as their little brother, just like siblings do.

HLM: How did you do in school?

Borg: I didn’t do too well in school. I was always academically behind and behind in my speech due to my deafness. It took a lot of extra effort just to be on the same level as the other students. High school wasn’t my favorite, unfortunately. I wasn’t treated very well by students. I endured both physical and verbal abuse from students, but in saying that, I had a good group of supportive friends to help me through it. Very supportive integration aides in my classrooms at school [also] helped me academically.

HLM: Did you ever think you would one day be in “Neighbours?”

Borg: I grew up watching Australian TV with my sisters, but it never crossed my mind that one day I’d be up there. There was never anyone like me on our Australian screens, so I never thought it was a possibility. When I did the “Neighbours” Tour in March 2019, I knew that I had to return to the studio, but next time it wasn’t going to be for another tour. One year and seven months later, I’ve made the move to Erinsborough! Haha.

HLM: Before being cast in the role of Curtis Perkins, had you watched the soap? If yes, who were your favorite actors/characters?

Borg: Yes! I watched “Neighbours” for years. My sisters and I watched the show after school religiously. The other day I did a scene in the Kennedys’ house and my adrenaline was through the roof, I was so excited. My favourite character was Bridget Parker. I absolutely loved her. Unfortunately, she is dead. Maybe she’ll return as a ghost. Fingers crossed!

HLM: What made you choose to go into acting as a career?

Borg: Growing up I did a lot of acting in school productions. Well, they were mostly background roles but still, they ignited my passion for acting. Once I finished high school I decided to take it seriously and pursue it as a career. I knew my purpose was to break into the Australian film/TV industry and try to make a change. Not only to be Australia’s first actor with a cochlear implant, but also to show the industry that actors with disabilities should be cast.

HLM: Did you study acting in college/drama school? If yes, did you associate with any deaf students because of your understanding of the community and your personal experience?

Borg: I’ve been training for the past seven years, and in those seven years I’ve only crossed paths with one other person with a cochlear implant. I always stood out in classes because of my disability, which always put me in quite a vulnerable position, but I was always proud that I was different [from] other actors.

HLM: Are you involved in any deaf groups, organizations or charities?

HLM: As an actor do you feel obliged to highlight deaf issues or would it depend on the part?

Borg: With my upcoming role as Curtis Perkins on “Neighbours,” I’m highlighting my deafness. But I do have many plans for my community that I hope I get to tick off my list.

HLM: How would you sum up your mission as an actor?

“I am here to prove that I am just as much an actor as anyone else.”

HLM: How do you see the role of Curtis Perkins progressing and what kind of storylines are you hoping for?

Borg: “Neighbours” has treated Curtis with so much love and respect and I am so thankful for that. There are some big storylines coming up for Mr. Perkins, which I’m very excited for everyone to see. Get ready to be shocked. I screamed with excitement when I found out. It definitely would be nice to see Curtis’ family or a bit of a romance or see Curtis in a dangerous position [where] he has to do something illegal, which would be entirely unlike Curtis because he’s such a good guy!

HLM: What advice would you give to other deaf or hard of hearing actors?

Borg: My best advice is to trust yourself, believe in yourself, and be kind to yourself. If I can do it, so can you. It wasn’t an easy road to get where I am, but I’m beyond proud to be Australia’s first actor with a cochlear implant.

“My best advice is to trust yourself, believe in yourself, and be kind to yourself.”

If pursuing a career as an actor is truly something you want, don’t give up, no matter what anyone says. Don’t give up.