These Deaf jokes and memes will lighten up your day

Watch: How a connexin 26 family thrives with help from Phonak hearing aids

When Jaxson was born, his parents Meagan and Bryan Ackerman didn’t notice anything abnormal about his hearing. Then, their second son was born, and the signs of hearing loss emerged.

“When we found out about Jaxson’s hearing loss, that was a bit of a surprise for us,” his mother, Meagan says.

Jaxson passed his newborn hearing test, but about two years later, when his brother Colby was born, they noticed Colby was responding to things that Jaxson never responded to.

“He would wake very easily,” Meagan says. “He would turn at the sound of a door opening. Jaxson never did these things, so we thought, OK, maybe we should get his ears checked.”

That’s when, at three-years-old, Jaxson was diagnosed with mild-to-moderate hearing loss.

At first, as many parents, Meagan and Bryan said they were shocked and overwhelmed with Jaxson’s hearing loss diagnosis.

“We didn’t really know what to do,” Meagan says.

Both Meagan and Bryan have normal hearing, but Bryan’s parents were deaf. Because both Bryan and his brother had normal hearing growing up, they didn’t believe that the hearing loss was genetic.

But, when their third child was born and did not pass his hearing test at birth, the Ackerman’s decided to have Jaxson genetically tested for hearing loss. That’s when they discovered that they both carry the connexin 26 gene.

“We have a one-in-four chance of having the children that we have having hearing loss. We have three children, and two out of the three have exhibited hearing loss, so we’re the lucky few.”

As the Ackermans navigated their new world of raising children with hearing loss, they say they knew they had to get them hearing aids right away. 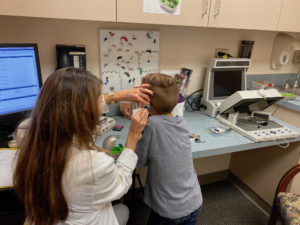 The first time Jaxson was fit with Phonak hearing aids, the Ackermans say there was a wonderful response.

“He heard birds for the first time,” Bryan says.

Jaxson was recently fit with Phonak Sky Marvel hearing aids, which are rechargeable and wirelessly connect directly to Phonak Roger devices without needing any external receivers.

Now, with his Phonak Marvel hearing aids, Meagan says Jaxson’s hearing levels test within the range of a hearing person.

Thanks to the noise canceling technology, he can hear in noisy environments, such as the classroom and the school cafeteria, and having the rechargeable hearing aids gives his parents an extra peace of mind.

At home, Jaxson is also able to use his Roger technology to watch TV, wirelessly streaming the sound directly to his hearing aids.