How this ASL online video game can benefit deaf teens

A guide for your next audiology appointment

How to help deaf teens advocate for themselves

As parents, it’s our job to advocate for accommodations and access for our kids.

It was one of those games. The kind where you give it your all but come up short. The team of gangly teens exited the basketball court, heads down as they made their way out the doors just outside the gym. The parents began gathering off to the side of where the players and coach met. I was close enough to make out some of the exchanges between players as the coach began his post-game talk.

This season’s coach was an English teacher by day, and a pretty good one, in fact. He had a calm voice, the kind that you lean in to listen to, as he shared philosophical ideas. The kind of voice that can also be challenging for a child who has hearing loss. On the court in the loud gym, his quiet ways didn’t always quite translate effectively.
The huddle of boys was now quiet, most players’ eyes staring down towards their feet, shoulders rolled forward in defeat. A posture you could read from across the room. The team proceeded to go through the exercise the coach facilitated after each game. The idea was rather than focus on the outcome of the game, to have each player say something good about another player. Some of the parents were chatting while another game was getting ready to begin through the open gym door. My son’s teammates started working around the circle, taking their turns sharing thoughts. I could see my son leaning in closer, studying their faces, which were still mostly looking down at the floor.

Then it was my son’s turn to share. I could tell he was nervous, shifting the weight of his feet back and forth, arms dangling and fidgety. His anxious body language was probably unnoticeable to most, but as a mother of a child with hearing loss, it was a crystal clear scenario. My son began to speak, a slight crack coming through in his words, even though his voice was beginning to deepen with age. It was then that I heard the coach abruptly tell him he wasn’t allowed to repeat what someone else had already said. My son’s face, now flushed from embarrassment, shuddered as he tried to come up with another answer.
What the coach didn’t recognize was that between the ball bouncing on the court behind them, whistles blowing, the scoreboard buzzing, and just all-around noise, the volume had increased ten-fold and my son could not hear.
I waited as my son gathered his things and we headed to the car. My blood was boiling. I shared with my son that even though it was a tough loss, I enjoyed watching him play. He made a few appeasing grunts and sank deep down into the passenger seat. We sat quietly for a good portion of the drive. It wasn’t until we were getting close to home that my son broke his silence. Eyes staring straight ahead, his face still flushed from the game, he blurted out, ”I don’t think Coach realized I couldn’t hear the other players after the game.”
”I know, son. The acoustics were horrible and it seemed like most of the boys didn’t feel much like talking and were mumbling,” I empathetically replied.
The conversation then led to a discussion about how next time he could remind his coach that it’s hard to hear in the gym, particularly when teammates speak in quiet voices. My son shrugged his shoulders. I’m guessing he heard me but wasn’t really excited about pointing out to others what seems obvious to us.

Here’s the thing. Hearing loss, for the most part, is invisible. Therefore, it’s fairly common for those around someone who is deaf or hard of hearing to forget, make assumptions, or think it’s not the “hearing part;” rather they think it’s a lack of paying attention or following instructions.
At that moment in the noisy gymnasium, after witnessing a coach not being understanding of my son’s hearing loss, I wanted to scream. My mama bear instincts almost came to a breaking point. However, I’m glad I kept my mouth shut and allowed my blood pressure to lower before speaking to the coach. Instead, my son decided to follow up by sending him an email, explaining how difficult it was for him to hear in the gym, particularly when other players weren’t facing him or speaking softly. The coach then set time aside to meet with him to come up with other ways he could better support my son, on and off the court.

My son is a teen. This isn’t something he would have felt comfortable doing even a year prior but with lots of encouragement and role-playing, he’s starting to feel more empowered to advocate for himself. By sharing with his coach how challenging the situation was after the game, the two of them were able to strategize ways to prevent it from happening again.
I have modeled this proactive communication for my child. In the past, he would roll his eyes and act embarrassed every time he witnessed me advocating for him, he has learned the words. He is beginning to develop his own self-advocacy voice; he is becoming confident enough to speak up.
The truth is, as parents, it’s our job to advocate for accommodations and access for our kids. But I would go a step further and say our children also benefit by being encouraged to stand up for themselves. It takes practice, but kids can become comfortable reminding others that even though they are typical, their hearing is not.

“Our children also benefit by being encouraged to stand up for themselves.”

Giving Our Children the Tools to Advocate for Themselves

One of the greatest gifts we can give our children is to provide them with the tools to spread awareness and champion for themselves. It starts by taking baby steps but will pay huge dividends.
Read more: How I teach self-advocacy to my hard-of-hearing children
Kids can begin to:

How else can deaf teens learn to advocate for themselves? 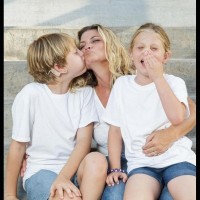 Author Details
valli gideons
I am a military bride who writes about raising kids with hearing loss and military life. I have a degree in journalism and use storytelling to spread awareness and understanding. You can find me musing around the internet and on my blog, www.mybattlecall.com
http://www.mybattlecall.com