Don’t be Awkward Around People with Disabilities… H.I.D.E.!

In a remarkable demonstration of turning lemons into lemonade, musician, composer, technician and creative artist Daniel Fishkin decided to turn his experience with severe tinnitus into art.

While working on his college thesis recital in 2008, his ears started ringing. And as it has for many of us, they never stopped ringing.  But in Daniel’s case, tinnitus not only changed his life, it also reshaped his art.

“I found myself in this double bind where loud sounds were very painful, but if I shielded myself from loud noises I was reminded of my hearing damage constantly,” Fishkin says.

Daniel received his MA in Music Composition from Wesleyan University, and currently teaches courses in analog synthesis at Bard College. He performed as a soloist on modular synthesizer with the American Symphony Orchestra. He developed sound installations in freight elevators and abandoned concert halls, and played innumerable basement punk shows. As an ally in the search for a cure, he has been awarded the title of “tinnitus ambassador” by the Deutsche Tinnitus-Stiftung.

“You get used to it” he says. In the absence of a medical cure, Fishkin vowed to find a creative solution. “I do not want to get used to my hearing damage – I want to use it.”

Learn more: How to manage your tinnitus effectively

Instead of simply living with it, Daniel started a project called the “Tinnitus Suites,” a series of concerts and sound installations that illuminate what hearing damage is and how it sounds. 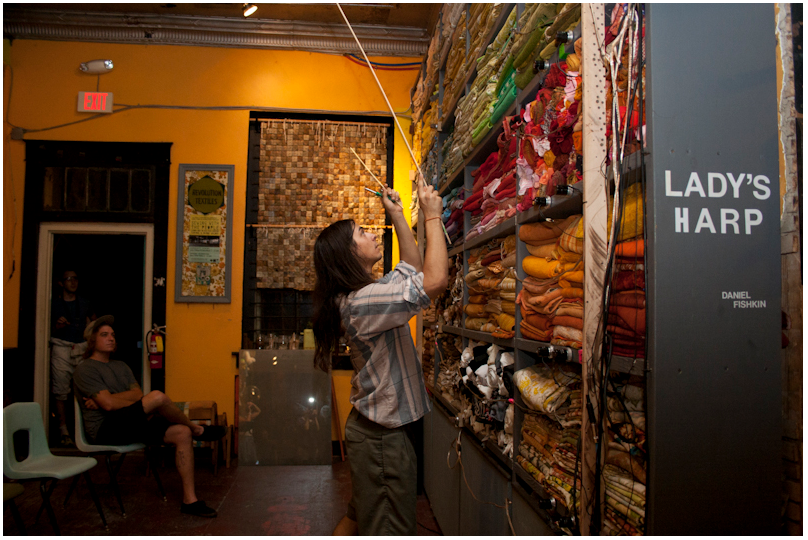 Together with a friend, the Bala Cynwyd, PA native built the unique Lady’s Harp, a large scale electro-acoustic instrument.

The Lady’s Harp consists of 20-foot long piano wires, activated by mixer feedback using guitar pickups and pressure transducers to get the strings vibrating. He then test drove the instrument in a series of installations with local artists culminating this past September. The series in Philadelphia is called “Philadelphia Hearing Damage.” He says that composing the Tinnitus Suites is an attempt to “exteriorize the experience of living with tinnitus into an art form.”

In preparation for his Phialdelphia concerts, Fishkin worked with musicians during the summer of 2016 to teach them how to play the Lady’s Harp, and to apply its techniques to their own instruments. The instruments included percussion, a bicycle wheel and other found objects: a cello, a modular synthesizer and a trombone. Rather than use gifted virtuosos, he selected musicians whose hearing might also be unstable.

The concerts investigate the aesthetics of hearing damage. In addition to the soundscape he creates, the concerts are supported  by conversations with neuroscientists and scholars who confront hearing loss or disability in their practice and personal lives.

How the Lady’s Harp Works

The vibrating strings on the Lady’s Harp create a soundscape – not unlike the cilia that transduce vibrations into electrical impulses for the brain.

“To make Tinnitus Music is not just to compose sounds, but also to compose situations that can break the isolation of the hearing damage experience,” Fishkin says. “As you walk around the room, the notes change along with your movements. Composing the Tinnitus Suites is about listening to the way tinnitus makes one listen.”

It hasn’t been easy. Health issues and technical challenges have made the project a labor of love – tough love, he says. Working mostly  from his own theories, Fishkin had no idea anything would work. His earlier instruments were built over a lengthy experimental period, used for performance/recording, and afterwards destroyed. Early prototypes failed due to the stress of sustained feedback burning out coils. He approached a colleague who helped him design a more flexible system.

The Lady’s Harp is not a self-playing sound installation—to make the Tinnitus Suites, Daniel must be present to perform it—to stand behind the mixer and twirl the knobs that give the feedback its shape. Eventually, he created a portable version of the Lady’s Harp.

“I built a 20 foot long collapsible frame, which can be reassembled and set on top of sawhorses,” he says. “I tested an installation of this freestanding version under a 3 day window and found I could build entire system in 48 hours. All the logistical problems of the previous 3 versions had been solved. In this configuration, Lady’s Harp seems to suggest a musical instrument rather than art installation. I’m not so comfortable with this shift. In fact, I prefer nearly every aspect of installation to instrument. I love the slow hand that installation forces.”