Can I take your order? How restaurants can better handle deaf customers

Charles Owens is a jazz legend who likes nothing more than to spread joy through the notes on his tenor saxophone. But years of playing music led him to a hearing loss that he worried would prevent him from pursuing his passion, until he discovered hearing aids that gave him a new lease on life.

But like many musicians, his hearing was damaged over time. His habit of standing next to the percussion is perhaps what led to his hearing loss. “The drums could never be loud enough for me,” he told Sonova.

“The drums could never be loud enough for me.”

Disorienting as hearing loss initially was, since last year Owens has felt a remarkable upgrade in the way he listens to the world. He gives the credit for this to his new pair of Phonak Audéo Paradise hearing aids.

For Owens, music began way back in 1949 when he was a curious 10 year old. In a room full of jazz instruments, it was a silver-plated alto saxophone that had him hooked. In the coming decades he overcame many financial challenges while continuing to pursue jazz. It paid off in 2016, when the film La La Land put him and his band firmly on the map. The Lighthouse Café, where they’d played regularly for 20 years, now had a full house.

At the heels of this success came gradual hearing loss that took Owens some time to recognize. It began with needing the TV louder along with frequent requests to family members to repeat their conversations. This eventually led him to acquire his first hearing aids. 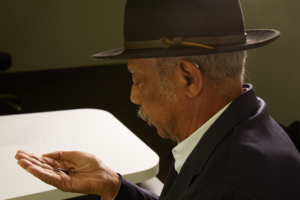 It was a half-hearted compromise. It wasn’t until Charles switched to Phonak Audeo – with settings customized for his nuanced, musical ear – that he returned to jazz as he likes it. Finally, he could play as well as teach. He could also listen to his grandson play the sax.

Now, the octogenarian hopes to continue playing jazz for another decade at least.

“I will play music until the last drop of energy in my hearing aid batteries drains to nothing.”