Tamika Catchings has been inducted into the Basketball Hall of Fame. Not only is she the first women’s player from the University of Tennessee to achieve this high honor, she is the first with hearing loss. 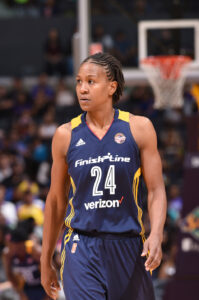 Tamika Catchings has called her moderate to severe hearing loss her “superpower.” It certainly didn’t hinder her career, which includes winning the Women’s National Basketball Association (WNBA) Defensive Player of the Year Award five times in her 15 seasons with the Indiana Fever and four Olympic gold medals. She’s garnished lots of other awards and acclaim, and she still holds the league’s career record for steals. A particular distinction she can be proud of is being the WNBA’s only player to spend an entire career of 16 or more seasons with the same franchise.

The daughter of former NBA player Harvey Catchings retired after the 2016 season. She now serves as director of player programs and franchise development with Pacers Sports & Entertainment. Catchings also operates the Tea’s Me Café on the north side of downtown Indianapolis, and serves as an ambassador with the NBA and WNBA. Additionally, she serves on a developmental committee with USA Basketball and as an SEC ESPN Women’s Basketball Analyst.

A cause close to her heart is the Catch the Stars Foundation, which she founded in 2004. It provides basketball camps, fitness clinics, mentoring, and literacy programs for underprivileged children to help them become successful in sports and academics. 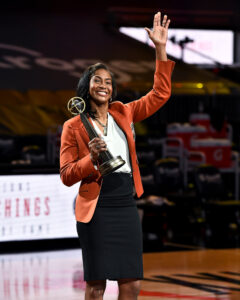 “Basketball chose me,” she said in her Hall of Fame speech. “An awkward, lanky, introverted tomboy born with a hearing disability, a speech impediment, and a will to overcome obstacles, dream big, and to change the world.”

Catchings also passed on what she learned from her parents.

“We all have dreams and goals. And whether you’re young or old, born with a disability or have been told of the things you can’t accomplish, tonight I share the same words that my parents shared with me, with a twist. If anyone can do it, you can. Shoot for the stars, work hard, and catch your dream.”

Unfortunately, the family moved around a lot. Because of this and other differences – of which hearing loss was just one – Catchings was bullied in school. One day in third grade, out of frustration, she threw her hearing aids into a tall field of grass. After looking unsuccessfully for them, Catchings’ mother told her they couldn’t afford to buy new ones and she had to learn to live without them. That same year, however, she started playing organized basketball. It wasn’t until she was playing basketball in college that she realized she needed hearing aids. Hearing Like Me had a chance to ask her about this and more.

HLM: What is the cause of your hearing loss, if known?

Tamika: We don’t know. Outside of my brother and I, no one else in our family has a hearing loss.

HLM: What has it been like having a sibling with hearing loss?

Tamika: Kenyon and I have something in common, so it’s been great being able to share some of our challenges together.

HLM: What was your hearing journey after diagnosis?

Tamika: I received hearing aids as early as I can remember. We were always in mainstream schools. My mom and dad made sure that we were involved and engaged in a lot of different things.

HLM: You didn’t accept your hearing loss until freshman year of college. How did you feel about it prior to that, and what changed?

Tamika: I threw out my hearing aids for a period of time because of the bullying in my early years. After a conversation I had with my college coach, Pat Summitt, about my hearing, she encouraged me to wear them and told me I would one day have a story to tell about this.

HLM: When did you and/or your dad realize you took after him and were a skilled basketball player?

Tamika: We played a lot of sports growing up, so I think it was later. I made a goal my seventh grade year of one day playing in the NBA. Working with my dad at that point, I know we all started realizing my drive and dedication to the game.

HLM: How did your hearing loss affect your playing – both positively and negatively?

“I think that my hearing loss made me a better player.”

HLM: What was it like playing overseas during the WNBA offseason as someone with hearing loss?

Tamika: I think the hardest part of playing overseas was trying to understand not just another language, but our translator with their accents. I enjoyed being engulfed in a different culture.

HLM: How have your teammates and coaches reacted to your hearing loss?

Tamika: Because I am comfortable with myself, there are times we just laugh and joke about it. If I miss something, or if they sense I missed something, they really try to help me out.

HLM: What accommodations, if any, have you requested during your career?

Tamika: I haven’t had any accommodations. I just try to make sure that I’m always positioned right in front to be able to catch all of the information in the huddles.

HLM: What are some standout moments from your career?

Tamika: Winning the 2012 WNBA Championship will always be at the forefront for me because of how special Indianapolis is and what the city has meant to me since being drafted.

HLM: What was it like being inducted into the Basketball Hall of Fame?

Tamika: Amazing! Being able to share in the moment with my hubby (Parnell) and all of our family was absolutely magical.

HLM: What do you want people with hearing loss to know?

Tamika: Our hearing loss does NOT define who we are or the level of success we can have. I look at my hearing loss as a superpower and am so grateful that God chose me to share my journey. Anything we dream, we can have WITH hard work and a commitment to accomplish our goals.