COVID has brought us one good thing: a new NBC comedy starring Marlee Matlin. Aaron Kaplan from Kapital Entertainment says he came up with the idea at the beginning of the pandemic. Daily COVID press conferences all featured sign language interpreters. Why not make that a show? 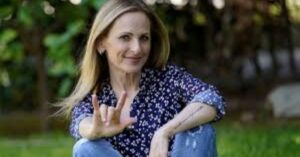 Deadline describes the show as set in the “cutthroat fast-paced world of sign language interpreting.” Marlee Matlin will star in and executive produce the single-camera comedy. She will play DJ, the manager of a medium-sized interpreting agency in Los Angeles who is “both overextended and overconfident.”

The currently untitled show also involves writer Ben Shelton (who recently directed the Netflix film “Candy Jar”) and Universal Television. Matlin’s sign language interpreter for over three and a half decades, Jack Jason, will also be an executive producer.

Matlin’s latest film “CODA” will be out on Apple TV+ August 13. She has other television credits, including “Switched at Birth,” “West Wing,” and “The L Word.” This project will be the second with her as a star. The first was “Reasonable Doubts,” which aired from 1991-1993. This will definitely be the first show about sign language interpreting!