Life can change in an instant. This was the case for Nelle Findlay, a 22-year-old Phonak hEARo from England. As a 21-year-old, she went from having “normal” hearing to joining the ranks of people with hearing loss. Sudden hearing loss can seem even more like a loss when it comes so unexpectedly. Life as Findlay knew it was no longer the same. 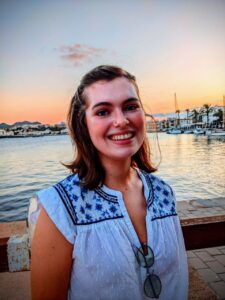 At first, Findlay thought only young children and older people had severe hearing loss – a common misconception. When she lost her hearing as a young adult, she felt alone, she says. She had been experiencing bouts of vertigo for about a year, then out of nowhere, Findlay had a significant vertigo attack. It lasted for several days and caused her left ear to go completely deaf. The vertigo attacks continued for several weeks and caused the hearing in her right ear to dissipate almost completely. Though unsure of a guaranteed diagnosis, physicians believe that due to these symptomatic attacks, Findlay’s hearing loss was likely due to Ménière’s disease.

Read more: 5 ways to support a loved one with Ménière’s disease

Skills that were easier for Findlay before became more difficult. She decided to research available resources and technology ranging from transcription apps on the phone to a cochlear implant.

Getting a Cochlear Implant as a Young Adult

After losing nearly all her hearing, Findlay investigated technology that would help her succeed. She now wears a cochlear implant in her right ear and uses a powerful hearing aid in the left ear.

A hearing aid amplifies natural, residual hearing, so it is beneficial for those who have some hearing left. For individuals, including Findlay, who have severe to profound hearing loss, a cochlear implant is commonly recommended.

“With my cochlear implant, I can hear much more than I could with just hearing aids, especially when there is no background noise,” Findlay said. “However, it is still not the same as having normal hearing. I still struggle to tell voices apart and to hear speech in background noise. Also, since I only have one implant, I don’t have any directional hearing.”

Adjusting to a hearing loss hasn’t been easy. One of the first hard life lessons for Findlay was that employers weren’t always so accommodating. In fact, Findlay didn’t just lose her hearing. She also lost her job due to discrimination. She has also become all too acquainted with listening fatigue, a common struggle for people with hearing loss.

Read more: How I’ve learned to live with Ménière’s disease

Despite the sudden changes in her life, Findlay isn’t letting her struggles get in the way of her dreams. She plans to attend university to study Modern Languages. In her spare time, she enjoys learning Esperanto, Spanish, and British Sign Language, as well as playing the recorder. She also has made YouTube videos that document her personal experiences with hearing loss and being on the autism spectrum. Additionally, she has a website,  where she shares her story and connects with others like herself, serving as a reminder that those with hearing loss are in this together.

“The best part of losing my hearing is the community,” Findlay said. “I have met so many wonderful people both online and in real life and have been able to connect with and help people in similar situations.”

“The best part of losing my hearing is the community.”

Findlay expressed her gratitude towards others with hearing loss and disabilities who continue to pave the way. She can count herself as one of them. 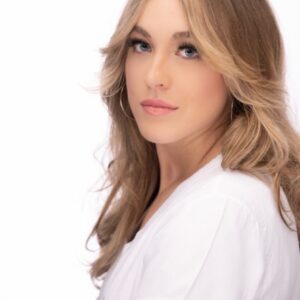 Author Details
Abigail Russell
Abigail Russell is a second-year medical school student at Indiana University School of Medicine. She is a bilateral hearing technology user, utilizing both a Phonak Naída and Cochlear Implant. Ever since she was diagnosed as a little girl, she has been an advocate for those with hearing loss. She loves spending time with people, enjoys coffee, and cuddles with her puppy, Rosie!