Why hearing aid wearers should be excited about hearables

Mom and daughter write a children’s book about hearing loss

Everyone has a hearing loss story, and sharing these stories are important for a variety of reasons. Stories can make us more empathetic, unite us and open us up to new worlds. That’s why we’re excited about a new book about hearing loss called “Now Hear This: Harper Soars with her Magic Ears!”

The new children’s book, authored by Valli Gideons and daughter Harper, tells the story about a child who is diagnosed with hearing loss and shares ways people in a deaf child’s life can better support them.

A new book about hearing loss

According to the book synopsis,

“When a child is diagnosed with hearing loss, it is overwhelming. The future can feel uncertain and parents might worry whether or not their child will thrive.

Harper’s real life story allows readers to follow her journey, providing both parents and children who are facing any kind of diagnosis a much-needed dose of encouragement. Through Harper’s navigation of hearing loss, kids can imagine what is possible. Understanding and awareness are key to feeling included, and the community around a child with hearing loss is critical.

This story shares ways people in a deaf or hard of hearing child’s life can better support them. Harper’s witty approach to storytelling resonates with young readers and will surely inspire the people who love and support them.”

The book tells Harper’s hearing loss journey from birth until age 12. She shares what it was like getting her first set of hearing aids, then she writes about what it was like to get a cochlear implant. Harper describes how every person is unique, even those with hearing loss. She details how families choose different ways to communicate and don’t all use the same technology.

A line from the book reads: “The thing about hearing loss is there is no one-size-fits-all. No two people experience it the same way.”

Inspiration for the book

Valli Gideons, a HearingLikeMe contributor, says she wrote her first short story in second grade and has never stopped writing. She has a blog, contributes to several publications, and wrote an e-book called “Navigating Your Child’s Hearing Loss.”

Both of Gideons’ kids have hearing loss. Her son, Battle, is 15 and has bilateral cochlear implants. Harper, 13, has a cochlear implant and hearing aid. When they were young, Gideons says she and her husband didn’t have a book to reference, which is part of why she wrote “Now Hear This.”

“This is the inspiring, encouraging book we wish we would have been able to read,” she says.

The message of “Now Hear This” 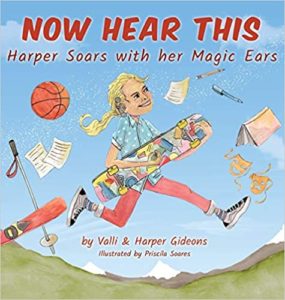 Understanding and awareness are key to feeling included, and the community around a child with hearing loss is critical. This story shares ways people in a deaf child’s life can better support them. Harper’s witty approach to storytelling resonates with young readers and will surely inspire the people who love and support them.

The book, which is over 1,200 words and about 30 pages, is a young reader book, but will appeal to a wide range of grades (K-8), according to Gideons.

“Even though this book is geared for kids, we wanted it to be ‘a stretch,’ and something they could grow into,” says Harper. “I was an early reader and always loved books that had rich vocabulary and themes.”

“The message is about how hearing loss has never limited Harper from reaching for the stars,” Gideons says. “The bar has been set high for her, and she has never felt there isn’t anything she can’t accomplish.”

Writing a book about hearing loss

Of the journal that inspired the book, Harper says her teacher provided writing prompts. She wrote some entries about hearing loss and others were about different things. Gideons wrote the first draft, and Harper gave feedback and input. Ultimately, the pair went through hundreds of drafts over a two-year period. They originally pitched the story through the traditional literary agent route. When they didn’t find the right fit in a timely manner, they opted to self-publish.

Harper was also “super involved” with the illustration process. Her mother says she has an artistic eye and a unique writer’s voice. The illustrator is Priscila Soares, who Gideons follows on Instagram as she’s admired her work for a long time. She also loved her story, as Soares is hard of hearing and has a son with cochlear implants. On a whim, Gideons reached out to Soares. She was shocked when Soares expressed interest in being part of the project. Soares had just completed work on a book and was excited to work on another.

“She was a joy to work with,” Gideons says of Soares.

In addition to the story and illustrations, there’s a photo diary in the back of the book and a glossary to explain some of the words and concepts in the story.

When Harper read the first draft, she thought some parts sounded weird because she was so much younger when she wrote them. But she realized that was her talking as a kid, not the teen she is today.

“I forgot what it is like to be in grade school,” she says.

Her mom let her change some words and phrases that sounded too “cringy.”

Harper helped add details as well as the point of view of a young person.

There are a few “very funny” parts of the story that go with the illustrations that make Harper smile. She thinks kids, parents, and teachers will crack up when they see them.

“I think it’s pretty cool to be a published author at age 13,” she says. “If the book does well, we want to donate a part of the proceeds to a charity for kids with hearing loss. I have been lucky that my equipment is covered by insurance, but I know not all kids are fortunate.”

“If the book does well, we want to donate a part of the proceeds to a charity for kids with hearing loss.”

In fact, Harper has a particular goal. She hopes to be on “The Ellen Show” and tell her about the book.

“It is exactly the kind of story she loves!” says Harper.

Meanwhile, Battle was ok with “Now Hear This” being Harper’s story as he’s more introverted. As the project progressed, he became a little more involved and gave input. The plan is to share his story at some point as well.

He might have to wait. Harper thinks “Now Hear This” could be the first in a series. It’s her story from birth to age 12. Sharing her middle school years might be her next book, as there are many funny and challenging things that happen in middle school.

“I think tweens and teens would like to read about a story like that because we experience life in a different way than younger kids,” she says. “We will see. My brother thinks his book is next, but I am the writer in the family!”

“It is because of this engaged, amazing online community that this book came to fruition,” she says. “We wrote it for THEM!”

Gideons has lots of marketing plans, which involve Harper doing readings at schools. She and Harper would love to be invited to speak, do readings, and share more about the book.

“Now Hear This” can be purchased on sites like Amazon, in paperback or hardcover, or bn.com in hardback, paperback, or ePub form.

When the pair set out to write the book, they envisioned it on the nightstands of every child who has hearing loss.

“We want the pages to be tattered from being read over and over,” says Gideons.

The pair is incredibly proud of the book and can’t wait to share it.

“Participating in this process as mother and daughter has made it so meaningful,” says Gideons. “We have both learned a lot and love the book.”