In celebration of Deaf Awareness Month, we’ve curated some deaf stand-up comedy. May this bring more laughter to your days! 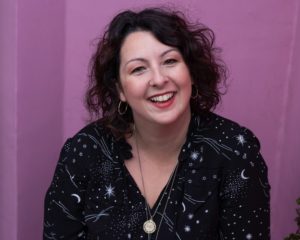 Samantha Baines is an award-winning comedian, actress, broadcaster, and children’s author. She is a Phonak hEARo and an ambassador for the Royal National Institute for Deaf People, fronting their cinema subtitles campaign.

She regularly writes for Huffington Post Comedy and Time Out. Baines also creates her own comic poetry. Since 2010, she has been a member of an all-female comedy sketch group, which has performed at the Edinburgh Fringe. Not only was she a finalist in the Funny Women Awards (2014), she was the first woman to appear in the UK Pun Championship Final in 2017. In 2018, she also appeared in the final.

Read more: Interview with author Samantha Baines of Harriet Versus the Galaxy

British stand-up comedian Rinkoo Barpaga was born profoundly deaf. He is well known for jokes that appeal to hearing audiences as well as people who are deaf or have hearing loss. He performs in British Sign Language, working in partnership with an interpreter who provides a voice-over for his shows.

With his tour Deaf Comedy Fam, Scottish born Ray Bradshaw was the first comedian to ever perform a stand-up show simultaneously in BSL (British Sign Language) and spoken English. Although not deaf himself, signing while talking is second nature to Bradshaw, because he was raised by deaf parents. Bradshaw is keen to perform inclusive shows that deaf and hearing people can enjoy together. However, as BSL has a different syntax to spoken English, the laughter from deaf and hearing audience members comes at different times as each gets the punchline.

Five-time American Comedy Award nominee for Best Stand-up Female Comedian, Kathy Buckley is a comedian and motivational speaker. She lost her hearing as a young child after having spinal meningitis. However, her deafness was not diagnosed until a few years later when she was in school.

Motivational video site Goalcast published this Facebook video of one of Buckley’s talks, which has over 64 million views.

UK stand-up comedian Steve Day uses “dilemmas of being a deaf man in a hearing world” as material for his shows. Since his first national tour in 2006, he has performed across the world to critical acclaim. He is also a familiar voice on BBC Radio 4’s You and Yours, and Woman’s Hour. He also appeared in two radio dramas, All Fingers and Thumbs with Bill Nighy, and Sound Barriers with Patricia Routledge and Caroline Quentin.

As a child, Canadian, D.J. Demers dreamed of one day becoming a stand-up comedian. Demers, who now lives in Los Angeles, was featured on Season 11 of America’s Got Talent.

The Phonak hEARo has used hearing aids from the age of four. He wrote about his deafness and comedy for Hearing Like Me back in 2016: “I’ve been performing stand-up comedy since 2009, and I really, really enjoy it. Comedy has brought me to many fun and interesting places, and I love all the novel experiences and wonderful people I meet.

“Comedy has brought me to many fun and interesting places, and I love all the novel experiences and wonderful people I meet.”

“Nowadays, I will talk about my hearing aids with anybody. In fact, that’s become one of my favorite parts of performing. I never could have imagined the large amount of people who approach me after a performance to show me their hearing aids or to share their experiences with a hard of hearing person in their life. We are all in this unique community together, and that’s a pretty great feeling. Whether you’ve been wearing hearing aids your whole life, or you got them in your older years, or as a result of an illness, it’s nice to be part of a community.”

Watch: The Here to Hear Tour

Jessica Flores is an American deaf comedian, improv performer, and YouTube sensation who wants to make others laugh while simultaneously discovering “her deaf self.” She was recently interviewed about her hearing loss as part of her role as a brand ambassador for Phonak. She explains that she was about seven years old when she discovered she had hearing loss. In high school, her hearing declined, and continued to decline thereafter.

As she says in her viral video Breaking Deaf Taboos, “For a long time, I always felt really alone and isolated. It was hard. It took me years to realize that I was not the only deaf person facing all these communication barriers and challenges every day.”

Read more: How to decorate hearing aids like Jessica Flores

British deaf comedian Gavin Lilley performs in BSL, sometimes alone and sometimes with an interpreter for his hearing audience members. Originally from Essex, Lilley now lives in Helsinki, Finland. His shows feature a range of topics including encounters with hearing people, and cultural differences between foreign sign language users. Lilley creates comedy sketches and films that can be found on his Facebook page.

Anna Morris is an award-winning UK comedian, writer, and actress who has single-sided deafness. She has written and performed four critically-acclaimed one-woman comedy shows which have toured the UK and Australia.

Morris wrote and starred in ITV’s Bad Bridesmaid, and can also be seen in Channel 4’s Lee and Dean. She is also the creator of viral lockdown comedy videos, including Back to Work,  New (Tier) Rules, and Vaccine!

Morris says on her website, “I adapt my live one-woman comedy shows to my hearing, keeping some of the house lights on so I can see who I’m performing to (in case they want to join in or speak). I can’t stand performing in the dark – I need to see in order to communicate. As a result, my shows have become fairly interactive, and my characters bring the audience into their worlds. It has shaped the way I perform.

“I wouldn’t change my disability for the world. It’s made me the person I am and helped me create believable and relatable comic characters. It also means I can sleep well when my boyfriend is snoring.”

Born in Newcastle, Smith became deaf at the age of three after having meningitis. Now he uses his experiences of growing up deaf in a hearing world. His observations are brought to life for his audiences, including visual puns that could only ever work in sign language. He is also not shy about tackling issues affecting the deaf community.