How to hear better in virtual meetings

How to help when there’s a hearing loss diagnosis

From my experience, Chicago theater accessibility is more advanced than many other cities. When I recently traveled there to see two well-known shows, I took advantage of the resources available.

When the award-winning Broadway musical “Hamilton” came to my city of Pittsburgh, I couldn’t get tickets. Not that it would have mattered; the captioning at my local theaters is handheld and inconsistent. In the past, I’ve had to leave performances because the system stopped working.

Thanks to a deaf friend who lives in Chicago, I knew that there were many open captioned (OC) Broadway shows – including “Hamilton.” I found a date that worked for my schedule and got tickets. I also discovered that The Second City, the improvisational comedy troupe that launched the careers of many famous comedians and actors, also had OC performances. When I asked if a show the weekend of my visit could be captioned, I was eventually told yes. I was so excited! 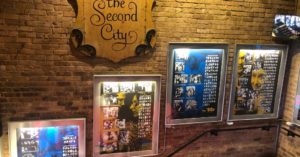 “Hamilton” — which was at the CIBC Theatre — had an LED screen that was positioned to the lower right of the stage. Unfortunately, this meant feeling like I was at a ping pong match, as I had to look between the actors on stage and the captioned words.

However, on the plus side, deaf and hard-of-hearing patrons were able to sit at the front,  in the rows near the screen. This meant we could see the actors’ facial expressions as well as the rivulets of sweat that ran down their faces.

The theatre was very attentive to individual needs. For example, a theater employee asked if two patrons utilizing the captions from the far right seats in the front row could switch with a couple a few rows back. This way their necks wouldn’t be strained during the show. The couple was happy to oblige.

Preparing for the Show

In preparation for this fast-paced show, I read and listened to the lyrics in advance. Before the show began, I asked the real-time captioner how the OC captions worked. As I expected, the script is already on the computer. Her job is to time the lines so nothing appears too early or too late. She did an excellent job.

Because I had to look back and forth between the captioning and the stage, I did miss some things. But overall, I was very happy with the Chicago theater accessibility. Finally, I was in the room where it happened!

Seeing the Broadway musical phenomenon for myself was amazing. Needless to say, Hamilton lives up to the hype! It was truly the best musical or show I’ve ever seen.

When I arrived at The Second City, I was told my reserved seats were close to the captions, but not too close. This was indeed the case.

The Mainstage Theater seats up to 290 people, and offers food and beverage service, so there were tables sprinkled throughout. Two LED screens displaying the captions were positioned on each side of the stage, and hung from above. The placement was perfect, as the captions were in the same line of sight as the actors. 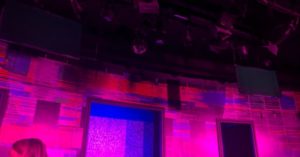 We saw the “The Best of The Second City,” which featured some of the best sketches, songs, and improvisations from its 58-year history. This was my first time attending a captioned comedy show. I loved it!

Deirdre Keane, president of the Hearing Loss Association of America (HLAA) Lincoln Park Chapter in Chicago also loves the captioned events at The Second City. “They do an amazing job with the captioning, especially in an improv show,” she says. “Now I do not have to bluff.”

On our way out, we saw one of the performers. I approached her to compliment her and tell her how amazing it was to be able to attend – and understand – a comedy show for the first time. She was so moved that she gave me a hug.

When I provided feedback afterwards, I suggested adding audio clues. My friend explained during intermission that one skit – which I didn’t find as humorous as the audience – was based off of ‘80s song lyrics. Another skit had a performer “shoot” the music, which then stopped. None of this was reflected in the captions.

The Second City actually has an Accessibility Committee, which was created by wanting to improve customer service. At first, they struggled to remain compliant with ADA laws and offer accessible programming when requested.

“Before long, we realized that we could do better,” Swanson says. “As a theater maker and a comedian with cerebral palsy, it was personally very important to me that we do better than simply meet the letter of the law.”

“As a theater maker and a comedian with cerebral palsy, it was personally very important to me that we do better than simply meet the letter of the law.”

Since July 2018, this committee has made numerous changes to expanded customer service training. They now have an advisory board of leaders in the disability community, offer open-captioned and audio-described performances, and have sensory friendly and ASL interpreted improv classes. The committee has also supported the offerings of the Training Center’s Wellness Program to include improv for people with Autism Spectrum Disorder, Parkinson’s, and veterans.

Their advances in accessibility were made possible thanks to a two-year grant from the Theater Development Fund (TDF). Receiving this was a watershed moment, because it allowed The Second City to put accessible programming on the schedule regularly without worrying about cost or logistics.

“We could instead focus on the unique challenges of captioning our work, which includes scripted and improvised material as well as a company of actors who are trained and asked to have a loose relationship with the script in pursuit of better comedy,” Swanson says.

What about when the grant is up? The fund goes out of its way to ensure that venues have a sustainability plan. Going forward, The Second City has elected to get staff trained on open captioning and to bring the service in house as much as possible.

“The hope is to be able to continue to program about one accessible performance a month, which is the calendar we’re currently working on,” Swanson says. “With the vast number of different shows we offer, we like to make sure that each gets a captioned performance as well as an audio described performance. In the future, we plan to develop more sensory friendly specific work as well.”

The Second City has definitely seen an increase in attendance with these changes. They’ve been able to invite folks that have never had the chance to enjoy their work before. Swanson added that they’re beginning to see folks flying in from all over the country because they’re one of the only sketch comedy/improv theaters doing this kind of work.

The Second City also has a relationship with the CCAC, which was started in 2013 by Christena Gunther when she moved to Chicago from New York, which had a similar group. CCAC greatly grew and expanded once Gunther was joined by Evan Hatfield (formerly of Steppenwolf Theatre Company) and Lynn Walsh (currently from Shedd Aquarium) who were already in Chicago doing solid accessibility work. CCAC officially incorporated in 2018 and remains completely volunteer-run.

While it took time to get cultural institutions in Chicago on board, it was relatively easy. Many people were interested in providing accessibility already or knew a bit about it. However, many others weren’t sure where to begin. CCAC encourages new and returning people to come to their monthly professional development trainings, which make clear that it’s a safe space.

“We are not the ‘ADA police,’” Gunther says, “and we won’t judge people for asking questions or using outdated terminology. We want to learn and grow together.”

There isn’t a single organization that can claim it’s 100 percent accessible, Gunther says.

“It’s cheesy, but I like to say that accessibility is a journey and not a destination!” she says. “We’re never done making our organizations accessible and open to everyone because there is a new performance, exhibition, or guest with a request we haven’t received before that will require some creativity and modifications to ensure all are truly welcome.”

CCAC’s website has a list of networks in the US that are similar to theirs. The scope and scale may be different, but the network piece is constant. The CCAC and Steppenwolf equipment loan program also helps ensure that organizations – regardless of size – are providing accessible offerings. The goal is that this will eventually become obsolete.  Once they understand there’s an audience and demand, organizations will be able to fundraise and budget for their own equipment.

What advice would she give to other cities who want to emulate the advanced Chicago theater accessibility? Gunther says to build a network in some shape or form. Start a list-serv (they use Google Groups) and meet monthly to start. Be curious and open, and start talking.

I would add one thing. Whether it’s seeing an accessible show or making one possible in your city, don’t throw away your shot!

What is arts & culture accessibility like in your city?