These deaf TikTokers are worth following

Angel Theory talks about being a hard of hearing actor

Angel Theory, a hard of hearing actor, dancer, and choreographer, was on AMC’s “The Walking Dead.” She now stars in Facebook Watch’s “Kinderfinger.”

The Washington Post recently interviewed her about her career. HearingLikeMe summarizes the interview here.

As a hard of hearing actor, Angel Theory is part of a challenging profession. A set is a busy place where many things happen above and beyond movie making. Directors aren’t the only ones speaking. There are makeup, hair and costume people, assistant directors, actors, extras, grips, and gofers. For an actor with a hearing loss, the movie set is a Rubik’s Cube of sound coming from every direction. But there are other challenges as well.

Actors, hearing or otherwise, don’t just read their lines. They make what are called choices in their speech and body language. These choices add up to a performance that may simply hit the mark or find its way to an Oscar, Emmy, or Tony nod. Many actors can do a particular role, but it’s the special actor who can make their role memorable though their choices.

Appearing in “The Walking Dead” 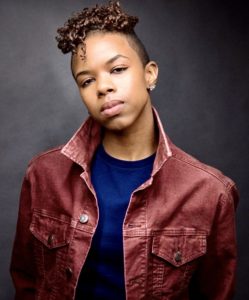 Theory lost her hearing at 14 as the result of two car accidents. Today at 20, she is best known for her role of Kelly on AMC’s ”The Walking Dead.” She also appears in Facebook Watch’s “Kinderfinger.” As a hard of hearing actor, she negotiates both the hearing and hard of hearing worlds with choices that have her shining ever brighter on the entertainment industry radar.

When she experienced hearing loss, she wanted to continue her dancing and choreography. Her initial challenge was simply trying to understand the music. She focuses on feeling the music first while wearing her hearing aids. As she also knows how to sight read, Theory listens to the music, then prints out the notes to ensure that she is always on the beat.

“She focuses on feeling the music first while wearing her hearing aids.”

Theory’s hearing loss has helped her focus more on the music and to feel it. She regards this as the best way for her to adjust to her hearing  challenges as an artist.

Using Vibration to Feel the Music

Theory trains herself to feel the vibration of the music on a variety of flooring. She also employs new technologies that enhance her feel for the music. There are special sneakers that connect directly to the music so she can sense the vibrations through her feet. A vest she can also wear works in a similar fashion. Normally, however, Theory prefers not to use any vibration aids. She’d rather just focus on the music experience more purely. She says that connecting to the music this way is like learning her ABCs. It allows her to “become” the music instead of just trying to keep up with it.

In front of the camera, Theory had to learn to manage her hearing challenges much as she did in every day life. At first, in this new world, she felt alone away from her family. Working with “amazing” actors inspired her to make the necessary transitions. She was helped by another actor on the “Walking Dead” set who plays her sister and is also deaf. It was a slow progression aided primarily by the patience and openness of others who made sure that her accessibility needs were met. That helped her to feel comfortable enough to do her best work.

Leaning on What She Knows

When appropriate, Theory leans on her choreography training to keep her feeling active, agile, and in shape when she’s doing stunts, running or taking part in a “kill” scene. She loves the action that she is required to do. As her dancing is an expression of body language, she incorporates that into the range of choices she makes as an actor. She says it also creates a greater closeness to her emotions, which is shared with her audiences.

“I think a lot of the hearing community feels that it’s scarier when someone that is hard of hearing or deaf is put into those scary situations,” she told The Washington Post.

In her new show, “Kinderfinger, “ Theory uses both her voice and signs (ASL), much as she does in real life. This is based on what she believes is the right “choice” at any one moment. She is pleased to be a representative of the hearing loss population. Reflections on her own journey, challenges, and skills on screen can inspire others. She only wishes she had similar role models growing up.

Theory now receives positive feedback from those who have seen her work. She is especially pleased to hear from parents who are happy for their children to see someone on screen mirroring their lives and challenges. In this way, Theory sees her work as bigger than herself and  having an impact on others. She says it only take a few seconds on screen to demonstrate what a woman of color (in her case) with a hearing loss can do.

“It just makes me feel like this is my purpose and everything that I do has meaning,” Theory told The Washington Post.