The Astrology of 8 Deaf and Hard of Hearing Celebrities

Swim, bike, run! The life of a deaf triathlete

Meet Julia Grunloh, deaf triathlete and Phonak hEARo! Competing in triathlons takes up most of her free time, on top of her day job and hearing loss.

Before Julia Grunloh could be described as a deaf triathlete, she was born with a genetic mild hearing loss in her right ear. At age 13, she began to lose the hearing in her left ear and experienced severe tinnitus. Over the next five years, her hearing fluctuated and continued to decline in both ears. It stabilized in her late teens. She was fitted with her first pair of hearing aids in October 1999, just a few weeks before her first school dance. For the past 10 years, she’s worn Phonak hearing aids and currently has Marvel hearing aids.

Grunloh has been running since junior high. She transitioned to longer distance events in college. Her husband was always more of a cyclist. When they moved to St. Louis in 2010, he started running more and she started cycling.

“After completing marathons and cycling centuries, we decided to start swimming and try triathlon,” she says. “There was a triathlon in our hometown of Effingham, IL, so we completed that as our first race – a 70.3 in 2015. We both loved the sport for the challenge and camaraderie and were inspired to keep racing and ultimately do Ironman in 2017. For Ironman, we started working with a coach, which made all the difference in being prepared.”

In addition to the Effingham 70.3 in 2015, they completed it again the following year. They also did Ironman Wisconsin in 2017. In 2018, Grunloh started racing Xterra (off-road triathlon) and has competed in four events in 2018-2019. Her current goal is to qualify for Xterra Worlds 2020, which is held in Maui, Hawaii. This will require her to win her age group in three races in 2020. She also plans to do another Ironman in the next few years.

The Challenge of Triathlons

Grunloh loves the challenge of pushing herself mentally and physically to see what she’s truly capable of. She finds the mental aspect of the sport especially interesting.

“I feel like sharpening my mental game transfers to all areas of my life,” she says. “It is also fun to be able to do three different sports. I find it more interesting and [it] also keeps my body healthier than focusing on one sport. The triathlon community is also incredible. Athletes cheer on other athletes out on the course, which is not something you see much in other sports.”

“The triathlon community is also incredible. Athletes cheer on other athletes out on the course, which is not something you see much in other sports.”

The main challenge with triathlon is getting in all the workouts, Grunloh says. The training is demanding and requires careful planning in order to get everything done. She always likes to feel as though she did her best and gave it her all.

“Of course it is always nice to win too!” she says.

Grunloh says there are really just two big challenges when it comes to her hearing loss and competing in triathlons. Managing hearing aids in a water sport is one of them.

“Thankfully, race directors have always been accommodating in allowing me or a family spectator to place my hearing aids in the transition area after the pre-race meeting (which often happens at the water’s edge or in the water immediately before the start of the race to share important course information),” she says. “I have to be extra careful in transitioning from the swim to the bike to make sure I get dried off enough to prevent my aids from functioning correctly.” She always has extra batteries as well.

The second challenge is biking and running with any sort of traffic, as that makes attention to safety paramount. She has mirrors on her bike to help with this. Similarly, when on trails, athletes have to ask to pass because the trails are usually very narrow. It’s easy to miss someone trying to get around you or have someone move for a pass without you knowing they’re coming, she says. 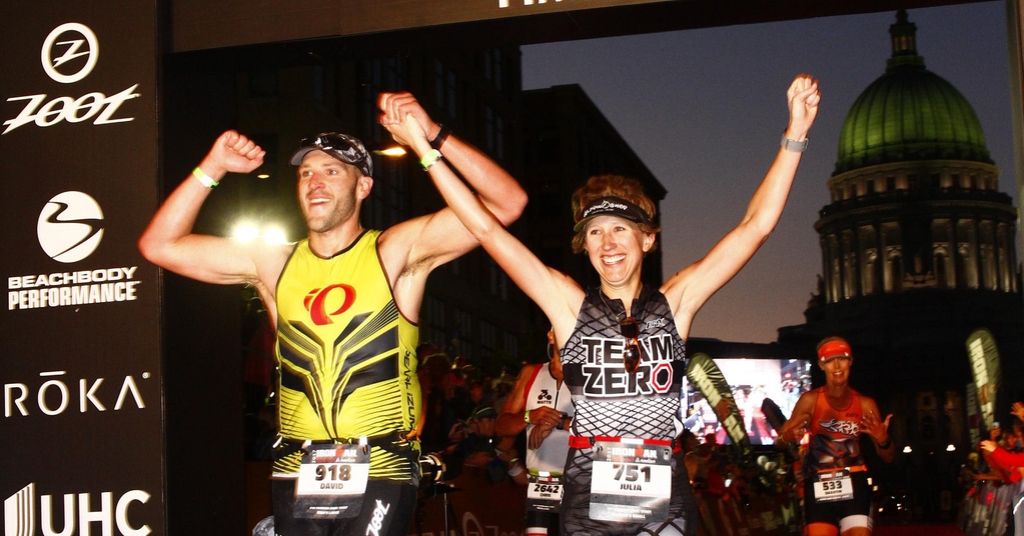 “I’m still working on the best way of handling this one, but I’m thinking it may involve a new bike jersey with an insignia on the back telling people to speak up because I have hearing loss!” she says.

Read more: How I communicate in sports with hearing loss

Grunloh says her husband is also incredible when it comes to helping in these situations as he knows where to be positioned and how to get her attention when needed.

“He is also key to communicating with me whenever I am in situations where I can’t use my aids,” she says. “He races almost all of the races I race, so his help has always been and continues to be invaluable to me.”

How humor helps with hearing loss

Competition aside, Grunloh is a CPA and works as a financial planning and analysis manager for a pharmaceutical company. Almost daily, she says she enjoys the little snippets of humor that hearing loss brings to life, like wildly mishearing something that results in a funny exchange. She’s always found humor to be her personal tool for dealing with hearing loss and helping others to understand what it’s like to live with it.

“There are many relationships and opportunities that have been afforded to me because of my hearing loss, and for that I am incredibly grateful,” she says. “I once told my husband that I really wondered what it would be like if I woke up one day and could just hear normally. Without missing a beat, he responded, ‘You would HATE it!’ And I think he’s probably right!”

As far as she knows, Grunloh is the only deaf triathlete. She hopes that getting the word out will recruit some more!

Do you know of any deaf triathletes?