Tips for working with an employee who has hearing loss

Film festivals across America are taking note of a short, but important film for deaf cinema.

“Super Sonic,” a film by hard of hearing filmmaker Saleem Nasir Gondal, is just 15 minutes long, but packs a big message. We had the opportunity to talk to this star filmmaker, to find out what it was like to make the film, and the message behind it. 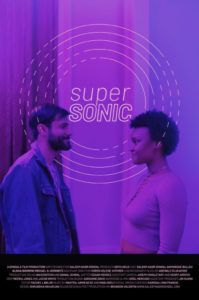 “Super Sonic” is a film by a hard of hearing filmmaker, based on his own life.

In the film, Gondal plays Wahid, a hard of hearing individual who finds love on the dance floor. Inventive sound design invites the audience into his world and hear what he hears. The film is an ode to the power of body language and empathy when words fail us.

HLM: Tell us why Super Sonic is important, not just to you, but to a wider audience as well?

Gondal: “Like the main character Wahid, I’ve had high frequency hearing loss since I was born. My preschool teacher noticed I wasn’t speaking in class. After that, I was fitted with hearing aids to catch up. But even with the aid of modern technology, I struggled to enunciate high frequency sounds like “s” without lisping. I could barely make out the words in conversations around me. My hearing loss was treated like incompetence. In order to protect myself from insults and pity, I built up a wall to distance myself from others.

“Through years of hearing aid upgrades and speech pathology, I kept hiding my hearing aids. They were plastic reminders on my ears of what set me behind everyone I met. The path to accepting myself came from exploring other forms of communication. Like using body language and presence to express myself when words couldn’t. When I realized that listening meant more than simply “hearing,” I felt like the walls I put around me could be chipped away.”

“The path to accepting myself came from exploring other forms of communication.”

“It’s important that the film centers hard of hearing audiences, who are so often left out of the theater-going experience due to accessibility issues. Captions are burned into the film. No matter where it is screened, the audience won’t miss a word of the script.”

Read more: What we can learn about open captions from this small movie theater

“We also wanted to ensure that audiences could see true representation of a character with hearing loss, something rarely shown on screen. My choice to play the main character was a statement to show that hard of hearing people can be the center of our own stories. In telling the story of my own self-acceptance, I hope this film will empower my peers in the hard of hearing community to tell their stories as well.”

“… hard of hearing people can be the center of our own stories.” 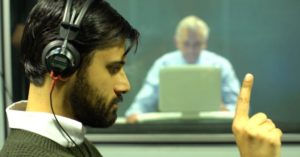 Gondal: “Making the film was a fun experience! It was the most ambitious project I had ever done.

“My collaborators were invested in telling the story truthfully while bringing their own flair to the production. I was clear in communicating how the sound design and visual storytelling would be done. Because of this, I found a team of talented filmmakers and actors who were willing to lend their time to the project.”

HLM: How easy was it to communicate your vision to your cast and crew?

Gondal: “I knew from the outset that in order to do justice to the film on a limited budget, I had to do extensive preparations. Despite still being a relatively new filmmaker and not acting in years, I chose to both act and direct for the film. This way I was able to truly center a hard of hearing voice in the creative vision for the film.

“While we activated a large community of donors and in-kind supporters for the film, there was the constant worry we wouldn’t have enough money or time to get the shot we needed. I had to learn to step back and trust the people around me.

“I spoke with the assistant director Coren, producer Sofia, and cinematographer Adewale regularly in pre-production. This ensured they would have everything they needed to know in order to carry the film behind camera while I was in character and directing actors.

“In the edit, the complexity of the sound design and figuring out the right rhythm took many sessions and rough cuts. The editor Rachel and post-production sound mixer Brandon really strove to communicate the unique perspective of the film. When we hit a roadblock with the footage (poor sound, lack of coverage, etc.), they took the time to show me new ideas which are now part of the soul of the film.”

HLM: Are you happy with the way the film has turned out?

Gondal: “The film turned out the way I planned, which is ultimately the best thing an artist can hope for. I dedicated two years to making this movie. I squeezed time between my day job and my collaborators’ tight schedules to finish editing the film. The process was daunting at times. I really wanted this film to do justice to the hard of hearing experience in a exciting and engaging way. But I’m pleased to say that this 15 min short film with unusual sound design lives up to the vision we started out with.

“Getting into festivals has been a great experience as well. The places we screen, the more awareness we’re spreading about the HOH experience. And the more opportunities I have to connect with HOH audiences waiting to see themselves represented on screen.”

HLM: What is next for you and do you have a dream project for the future?

Gondal: “I’m working on a feature-length version of the story to bring this story to mainstream audiences.The relationship between Wahid and Samar in the short film explores how easily miscommunication can interfere with a budding romance.

“In the feature I’m planning to explore some of the consequences of those miscommunications. “Super Sonic” uses captions to help convey the character’s HOH experience. As a result, I’m excited about the possibility of having a wide theatrical release where audiences, hearing or hard of hearing, can experience the joy of reading captions on the big screen.”

“My dream project would be to tell stories centering people of color and disabled folks in a fantasy action adventure. Fantasy stories like “Children of Blood and Bone” and “Avatar: The Last Airbender” are huge loves of mine. Like all genre stories, fantasy gives us stories which speak about real life issues in an inventive and exciting way. Young QTPOC and disabled audiences are waiting to see themselves in the stories they watch. It’s my goal to keep telling those stories in our world and others.”

Learn more about hard of hearing filmmaker Saleem Nasir Gondal and his works on his website.