5 things this pediatric audiologist wants you to know

This inclusive ‘Star Wars’ ad will bring you to tears

A Star Wars ad has gone viral and for good reason. As everyone eagerly awaits the premiere of “The Rise of Skywalker” December 20, the heartwarming ad highlights why inclusion matters.

Created by Wunderman Thompson Philippines for Filipino phone company Globe Telecom, the “Star Wars” ad has English subtitles for audiences. Entitled “A ‘Star Wars’ experience for all,” it features two young boys in the Philippines putting their imagination and creativity to work as they collect materials to build what looks like a spaceship. When they’re finally done, they show it off to a friend.

This is where you pause to watch the ad if you haven’t already. We don’t want to spoil the twist ending for you. Go ahead, we’ll wait.

As you just witnessed, it turns out the boys were creating an immersive “Star Wars” experience for their friend. Mirroring the action on screen, while the girl views the “Star Wars” trailer, the spaceship she’s sitting in moves, water is sprayed, and other inventive props are used. When it ends, she looks on in wide-eyed wonder.

Then comes the gut-punch.

The boys use sign language to ask, “Did you like it?” She signs back, “I loved it!” The boys’ creativity and thoughtfulness are enough to provoke tears even before the reveal that the girl is deaf.

The message of the ‘Star Wars’ ad

According to the agency, the ad’s goal is to show that “the wonder of ‘Star Wars’ can touch the lives of everyone, even of those who can’t hear it.”

“…the ad’s goal is to show that ‘the wonder of ‘Star Wars’ can touch the lives of everyone, even of those who can’t hear it.'”

The ad is part of Globe Telecom’s Give-Back Program, which is raising money for Virtualahan, a virtual school for people with disabilities. The campaign tagline is “A Galaxy Beyond Yours.”

Reaction to the ad has been nothing but positive.

In a Facebook group for deaf adults, comments include “That is so unique!” “OMG that was beautiful!” and “Children’s creativity coming to life! Loved it!”

On Twitter, the ad is often paired with the hashtag #inclusion or #inclusionmatters. 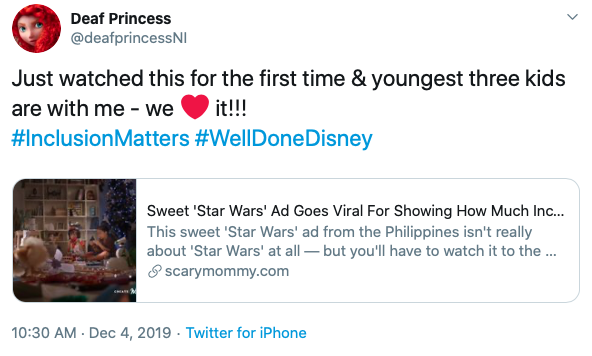 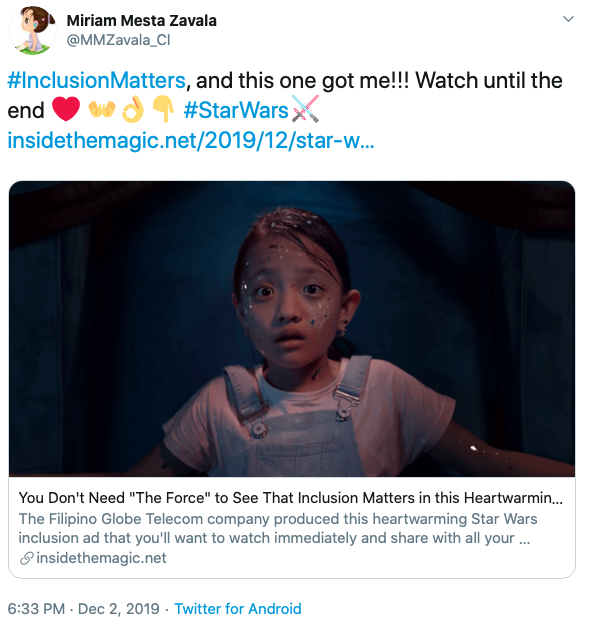 Let’s face it, people who are deaf or hard of hearing are often left out of the theatergoing experience. Even if a theater has captions, they’re not always reliable. Or if they’re reliable, they’re not complete, leaving out audio cues or lyrics.

Back in 2001, a study done by Dean Shibata of the University of Washington, found that deaf people “hear” vibrations. Over the years, there have been articles written about inventions to help us “see” and “feel” sound, such as bracelets and wearable sound systems that make music tactile. While we make do with our smartphones and Apple watches as we wait for a practical, affordable “feel-sound” device, a 4D film experience will suffice.

For 3D films, special glasses are required, while 4D goes a step further, making the film a true physical experience. 4D is not new; it’s offered at amusement parks like Disney World and Legoland. The best part is everyone benefits. And as this Globe Telecom ad shows, it’s possible to pull off a low-cost, small-scale version.

What a poignant way to show the effects of inclusion. We’re not crying, you’re crying. 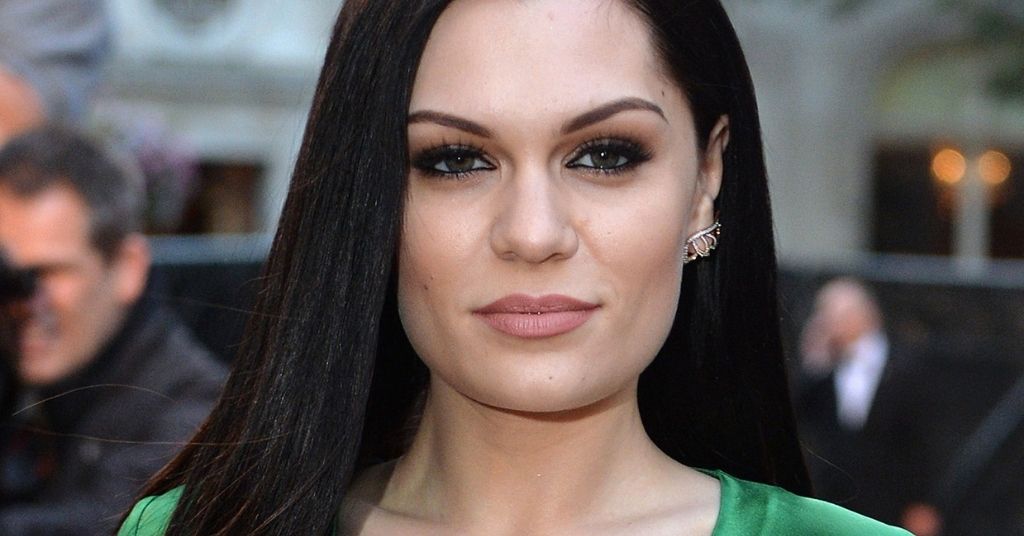