This is how to get FREE hearing technology at your university

This article was adapted from a Q&A interview with Sam Baker, by musician Stu Nunnery.

In 1986, Texan musician Sam Baker was traveling on a train to Machu Picchu in Peru.  He had no idea that the Shining Path guerrilla group placed a bomb on the luggage rack just above his head. The bomb exploded killing seven passengers. Baker was left with numerous injuries, including ruptured ear drums.

In that instance, his life changed forever.

Today, Baker is an internationally recognized folk musician and recording artist, but his injuries and hearing loss after the explosion left him with a lot to recover from. In addition to losing his hearing, he had brain damage, a cut artery and a persistent intense case of tinnitus. His injuries required 17 reconstructive surgeries, including three ear drum replacements with only two being successful.

Still, he was still able to find success despite his injuries. Rolling Stone Magazine called Sam’s album, “Say Grace,” one of the top 10 country music albums of 2013. NPR said, “Sam Baker’s ‘Say Grace’ Is At Once Beautiful And Broken.”

Baker was a musician before the explosion, but the experience and his hearing loss changed his music.

“I could feel the music more than hear it- with my ear drums blown in,” he says. “In the hospital, I had a tape driven thing and could turn the music up very loud. I never heard details, but I could feel it.”

Adjusting to life with hearing loss 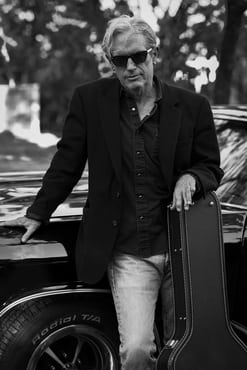 Baker has had to make adjustments since losing his hearing. He wears a hearing aid when at home and on the road, but has an in-the-ear monitor when he performs live. In the studio he wears headphones.

He has also become more aware of his environment, he says, and knows the places where it will be harder for him to hear.

“I orient to whomever I am talking to. I avoid loud places if I can. I try to remember to not isolate, to withdraw from life. I talk too loud. I sing too loud.”

Making these adjustments isn’t enough though. Baker also recognizes the importance of having support for his hearing loss. “…hearing impairment is isolating. I try to resist and it is one of my missions to get people who are losing their hearing to get hearing aids and to consciously fight the isolation,” he says.

Becoming a “better” musician after losing his hearing

Baker’s hearing loss never kept him from playing and writing songs. Although it took time for him to learn how to play the guitar again, due to his left fingers being badly injured, over time he learned how to play left handed. But once he learned, he began to write songs better than he ever did before.

When asked how he retrained himself and his brain, Baker responded, “Persistence. And more persistence. And friends and family who were loving and supportive. No one can do anything like this alone. It was a group effort.”

His experiences in Peru compelled him to songwriting and he believed it made his songwriting better. One song in particular that he mentioned is his song ‘Steel.’

“The line was, ‘sitting on the train to Macchu Picchu / the passenger car explodes.’ The song became “Steel.” That was when I became a songwriter. Really that is when I became an artist. Like I found words and texture. Sound is a texture. As is canvas.”

Learn more about Sam’s music and his incredible journey on his website.