This is how loud a typical day is

10 things no one tells you about being a deaf teen 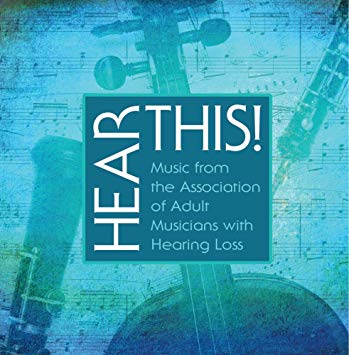 Are you a musician who lost your hearing? If you are, you surely are not alone.

I first met Charles Mokotoff, a professional classical guitarist, through the Association of Adult Musicians with Hearing Loss (AAMHL) in Washington DC.  The association serves as a resource for musicians both professional and amateur to exchange information and promote each others work and journey.

Charles has a tragic hearing loss story and yet a highly successful musical life.

He holds Bachelor’s and Master’s degrees in guitar performance from Syracuse University and Ithaca College. He has served on the faculties of numerous colleges and universities in New York and the New England area as a lecturer in classical guitar and lute. During his career, Charles made two Far East tours and a well-received New York City debut at Carnegie Hall. He has also performed solo and ensemble recitals in Chicago, Boston, and most recently at the Lincoln Center Performing Arts Library in New York City.

He is also an outspoken proponent of making music with hearing loss. I had the pleasure of talking with him, and his journey of playing classical guitar after hearing loss:

Stu: What happened to your hearing?

Charles: In 1970, in my early teens, I experienced the sudden onset of hearing loss in both ears overnight. I’m fortunate that it has remained stable since that time.

Stu: Was there a warning?

Charles: Prior to that night, I had been suffering from recurring ear infections that my doctor was treating with antibiotics. I believe it was Erythromycin, which is known to be highly toxic to the ears now, though it was the remedy of choice back then.

Stu: How did you respond right after?

Charles: I saw several ENT’s and was finally given a diagnosis of “nerve deafness.” I was moved into a hearing aid, a very big analog BTE device, but there were no further interactions with those doctors. I now wear hearing aids in both ears.

Stu: Were you a musician prior to losing your hearing?

Charles: In elementary school I played French horn in the band and orchestra, so I already read music and was well associated with the classical repertoire. The idea that I might one day play “orchestrally” as a soloist was very intriguing and still is to this day. You could also say I was a rock and roll musician of sorts. Like the rest of the world at that time, I was drawn to the pop music of the ’70s, which would be Cream, Mountain, Allman Brothers, Jethro Tull, the Eagles, etc.

Stu: So, you picked up the classical guitar after your hearing loss?

Charles: I actually played electric and acoustic guitar before my hearing loss in some pretty horrible, loud and minimally talented bands. But that was pure, unadulterated fun. During my freshman year in college, I heard a classical guitar being played and that was it for me.

Stu: Did you at first believe that your hearing loss would be a limitation?

Charles: I assumed that it would be, but simply put, never underestimate the power of a highly motivated 18-year-old. I was dead set to show the world I could do this, though even to this day I’m not sure why.

Stu:  How are your current hearing aids configured?

Charles:  I currently use hearing aids in which the speech program is dramatically different than the program I use for music. It took me a month or two of repeated audiologist visits to satisfactorily create a comfortable music program. It is primarily tuned to me playing a guitar. When I go to a concert, I make adjustments to it on the fly by using app settings, which is one reason why I am drawn to hearing aids that have such encompassing connectivity settings.

“I currently use hearing aids in which the speech program is dramatically different than the program I use for music.”

Stu: You are in touch with Marshall Chasin and others who have guided you about music and hearing loss.

Charles: While I do not see him clinically (in Toronto, CN) I call on him from time to time for a private consult, which is very helpful. Marshall is digging deep into helping musicians with hearing loss understand music and their technology. He has some very provocative ideas and is widely respected. And Richard Einhorn has been invaluable in his technical and musical advice and kind support. In addition, he is himself a wonderfully inspiring musician with a significant hearing deficit.

Stu: You and I members of the AAMHL – and we both appreciate the increasing attention being given to musicians and hearing loss today from the hearing medical and tech communities.

Charles: I am forever indebted to AAMHL and the wonderful people I have met through that organization. Our exchange of ideas and experiences is very gratifying. Last summer,as you remember, we both played at an open mic night at the Hearing Loss Association of America (HLAA) national convention in Washington DC with other hearing challenged musicians.

Charles: The latter is far more challenging I would think. It requires re-training – and that is more difficult than starting from scratch. In that case, no bar has been set to try and meet. Losing your hearing as a musician also requires not a small amount of rehabilitation, both aurally and mentally to come to grips with how to do in an altered state what you used to do just getting out of bed in the morning.

Stu: Can you talk about what makes the best sound for music for you? What do you need to make it? What adjustments?

Charles: I’ve noticed over the years that there is a synergy between the sound I perceive and how it feels when I attack the string in a certain way. This is, in fact, no different than for any musician who touches strings directly. But for me there is the need to come to terms with a baseline that changes each time I get new hearing aids or make adjustments.

Charles: It makes it very difficult, for example, to judge how a new guitar sounds when I play it. However, and this is crucial, my approach to technique stays the same. I have great confidence that when I sit down with a guitar, I am going to be able to get a clear, pleasing and highly audible sound. It is difficult to describe, but it is a combination of the feeling of the strings under my hands, the vibration of the guitar against my chest and the sound that I am processing.

Thank you for sharing your experiences with us, Charles!

Are you returning to music after a hearing Loss? Are you able to make adjustments to your hearing aids in the process? Have you noticed the connection between what you hear and what you feel in making music successfully and comfortably? We’d love to read your story in the comments!

For more information about Charles Mokotoff view his website