Deaf magician London Jones is an unusual 13-year-old. The Calgary, Alberta resident is an award-winning magician who has appeared on television and met and performed for the famous Penn and Teller.

Being a Magician with Hearing Loss

This deaf magician’s story begins at the age of one, when her parents began to notice that something was wrong with her reactions to her surroundings. One day a pot was dropped behind her as she played. She exhibited no reaction. Tests followed, leading to a diagnosis of moderate-to-severe hearing loss in both ears. Just before her second birthday, she was fitted with hearing aids.

Jones wore Phonak Marvel 90 rechargeable hearing aids until recently, when she was fitted with her new Phonak Paradise Life R90s, which she says she is delighted by. Her father, Jeff, believes the Phonak technology built into the hearing aids allows her to cope very well in social surroundings such as coffee shops and restaurants. She has been known to perform magic tricks there in the hope of receiving a free dessert, which she says works about half the time.

The hearing loss diagnosis was a very difficult thing for her parents to process. Her dad had visions of her having a life full of challenges and hardship.

“If I could have known that this is the young lady we would have at 13, and how little her hearing loss affects her daily life, then those words back when she was only two would not have been so damning,” he said.

Jones gives a presentation at the beginning of each school year to her peers, explaining her hearing loss and communication needs. She also loves talking to other families with hearing loss. She does have some challenges regarding her hearing loss, like swimming lessons. They tend to be difficult since she’s unable to wear hearing aids and hear the poolside sounds.

“Without my hearing aids, the world sounds like a whisper,” she explained. “When aided, I am (almost) like any other able-hearing child. In my classroom, the teacher uses the Phonak Roger touchscreen and the students in class regularly use the Roger microphone. I have used this equipment since first grade.”

Jones has put in a lot of work. Her parents are extremely proud of who she is today. “We know that whatever she decides her future to be, it will be one filled with success, laughter, and amazement,” her dad added. 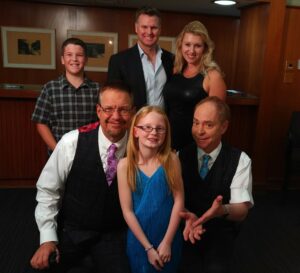 Jones was interested in magic from a young age, thanks to Penn and Teller. She started practicing the craft at age six. Four years ago, she was lucky enough to meet them and remembers the day vividly. She recalls how tall Penn was, which scared her speechless. It was her first time meeting someone she had seen on TV. She and her family spent about 20 minutes with them. They were very nice, she says.

In fact, when Jones was too nervous to perform her planned trick for them, Penn took her aside and gently told her that they get nervous too. Practicing before each show helps with their nerves. He suggested they go back to the green room where she could rehearse. When they came back, she was able to do her trick. Teller spoke to her as well, which she said was “neat.” During the show, they gave her a couple of shout outs with a spotlight on her. The crowd cheered.

Penn and Teller also introduced her to Calgary magician Carisa Hendrix, who has mentored her for the last four years in person and on Zoom Video Conferencing. They have regular lessons, and Jones has learned a lot, she says. She is now a seasoned performer. The deaf magician even performed for Deaf and Hear Alberta’s fundraiser. It was her first time working with a sign language interpreter. Jones had to adjust her script and pause when talking to make sure she wasn’t getting too far ahead of the interpreter.

Performing as a deaf magician

As a deaf magician, for the most part, Jones does very well. She is able to interact with her audience and hear the crowd’s laughter and applause. The majority of her audiences may not actually realize she wears hearing aids.

“I wear a microphone that has been specially altered to fit around my hearing aids,” Jones explained. “Usually a microphone would anchor inside your ear. Other than that… I am able to speak and hear everything! I can listen to the crowd when I need to, talk to them, and also hear my music for cues.”

Jones loves interacting with the audience, and feels comfortable on stage. This has increased her confidence in other areas of her life, she says.

“My friends love my magic, think it’s cool, and ask me to do tricks often,” she said. When her brother’s friends come over, they always want her to do a magic trick first, before they play video games or hang out. Her hearing loss isn’t spoken about often. She is treated as part of the group. “I’m not London, the girl with hearing aids,” she said. “I am just London.”

“I’m not London, the girl with hearing aids. I am just London.” 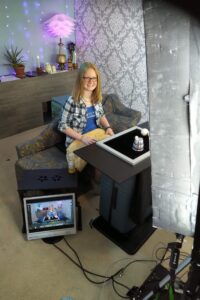 This deaf magician has performed in front of hundreds of people since she was seven. She has appeared on television (including a levitation on a Penn and Teller special) and won awards for her magical skills. Now she is busy preparing for a big competition in July, where she will be competing at the  International Brotherhood of Magicians convention (I.B.M.) in Atlanta.

Her long-term goal is to continue to improve and get better at doing parties and corporate events. Eventually, she would love to travel the world and perform on a cruise ship. She may have to be at least 18 to do that.

Jones has never let her hearing loss stop her from doing anything. That is what she tells other kids with hearing loss. “Be brave and do whatever you want to do,” she said. “My parents never treated me as someone with a disability, so I grew up with all of the support and guidance I needed to attack whatever I looked at. Magic is awesome. So much fun, and a unique skill to have.”