Your 2018 holiday gift guide for those with hearing loss!

Kitty O’Neil, the deaf stuntwoman who wanted to go faster

Pneumonia was the one challenge Kitty O’Neil couldn’t surmount; the daredevil recently died at age 72.

But what she faced in her unusual life would have felled the average person. The deaf stuntwoman proved that hearing loss doesn’t need to hold anyone back from achieving the unimaginable.

Growing up with hearing loss

When O’Neil was five months old in Corpus Christi, Texas, she somehow managed to contract mumps, measles, and smallpox. Her mother immersed her in an ice bath, which may have saved her life. The high fever from her illness took her hearing, but her parents didn’t know until she was two.

Her mother taught her how to read lips and speak, and later founded a school to help other children do this. O’Neil’s love of speed was obvious early on. When she was four, she made her father put her on his lawnmower and ride it as fast as possible. Her father was a US Army Air Forces officer who became an oil wildcatter; he died in an airplane crash when O’Neil was young.

Deafness didn’t stop O’Neil from learning how to play the piano and cello by feeling the vibrations. And because her mother encouraged her to remain active, she became a platform diver. In 1962, she moved to Anaheim, California to train with Olympic gold medalist Sammy Lee. She became one of the top young divers in the country and was expected to medal in the 1964 Olympics when she broke her wrist and then got spinal meningitis.

Doctors told O’Neil that she might never walk again, but within two weeks she was out of bed. “I got sick, so I had to start all over again, and I got bored,” she told the Midco Sports Network. Diving was no longer scary enough. “I wanted to do something fast. Speed. Motorcycle. Water skiing. Boat. Anything.”

The need for speed

So that’s exactly what O’Neil did. She raced motorcycles and speedboats. In 1970, she set the women’s water ski speed record. She told Midco, “It was thrilling. It feels good. The speed…gives me goosebumps. I love it.”

During this period, she battled cancer, which included two operations. But it didn’t stop her. If anything, she went from being a daredevil to a stuntwoman. In the mid 1970s, she met Hal Needham, the top stuntman in Hollywood. He told her about stunt. “What is stunt?” she asked him. He said, “Shut up, I’ll train you.” “Ok, here I am,” she replied.

Needham got O’Neil into the movie business and helped her become the first woman to join Stunts Unlimited, Hollywood’s most exclusive stunt group. Her career took off from there. It helped that O’Neil didn’t turn down anything. From the mid-1970s to the early 1980s, she stood in for actresses like Lindsay Wagner of “The Bionic Woman.” She dangled out of a sixth-story window for the TV show “Baretta.” Some of the movies in which she performed stunts include in “Airport ’77,” “The Blues Brothers, and Smokey and the Bandit II.”

“She dangled out of a sixth-story window for the TV show ‘Baretta.'”

Googling O’Neil’s name likely means seeing the infamous picture of her dressed as Wonder Woman leaping off the Hilton roof with arms spread wide. She fell 127 feet before landing on an inflated airbag for the “Wonder Woman” television show, which set a new woman’s high-fall record. She told the Washington Post, “If I hadn’t hit the center of the bag, I probably would have been killed.” She later broke her own record by jumping from a helicopter onto an airbag 180 feet below. 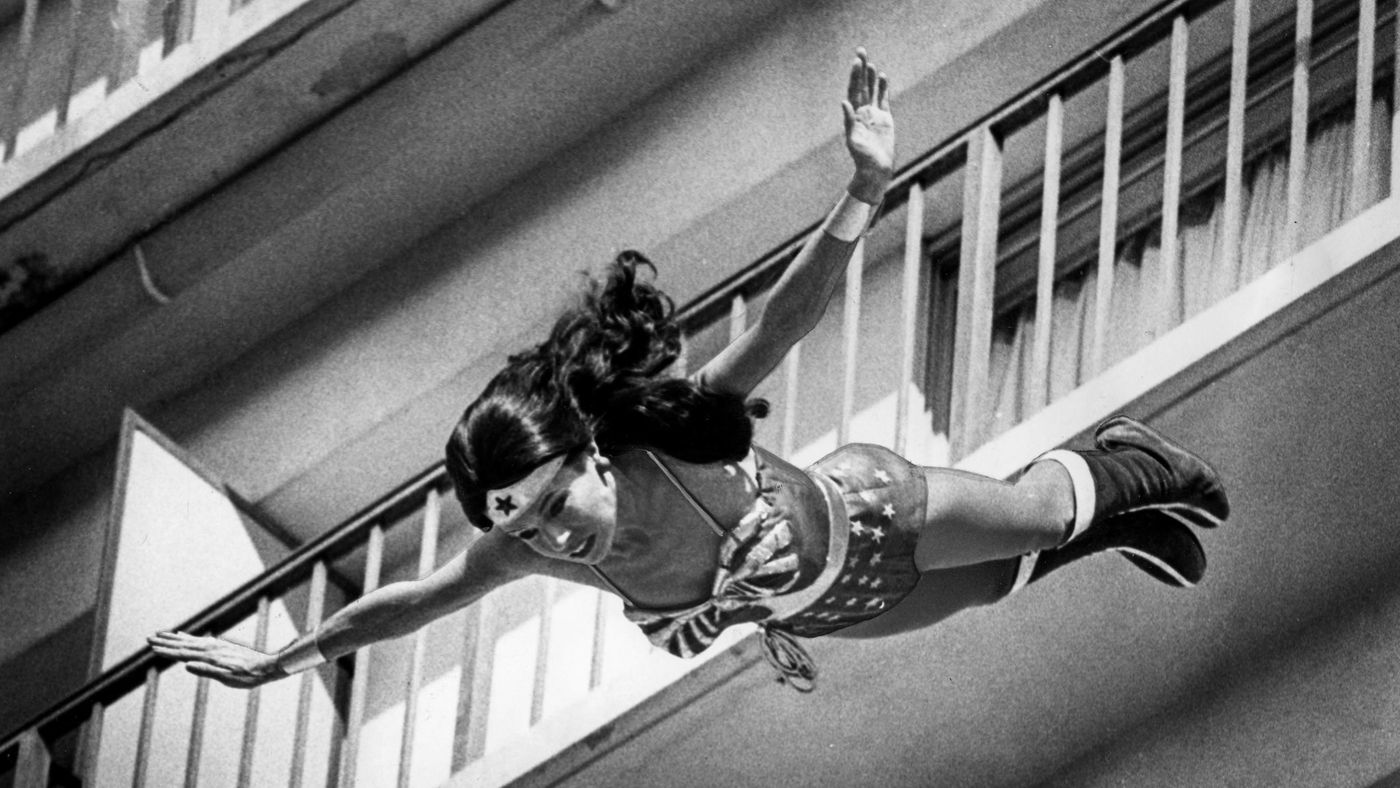 In 1979, the top Hollywood stuntmen made up to $100,000 a year. O’Neil’s salary was probably at least half that. She wasn’t in it for the money, though. It was all about thrills for her. “I love danger,” she said. “Danger demands using everything you’ve got to overcome it. That is attractive.” Around this time, she was the subject of a made-for-TV movie called “Silent Victory: The Kitty O’Neil Story” with Stockard Channing playing the lead. O’Neil said the movie was only half accurate.

O’Neil’s deafness was certainly a factor in her career. She said it helped deepen her concentration. She liked her deafness and considered it a challenge. “I know I’m deaf,” she said, “but I’m still normal. The way I look at it, …it’s not a defect. People say I can’t do anything. I say to people, I can do anything I want.”

“People say I can’t do anything. I say to people, I can do anything I want.”

Her size was another advantage; she was 5’2” and 97 pounds. Ky Michaelson, a stuntman and a friend who designed some of the vehicles she used to break records, said this helped her withstand the strong G-forces of her record-setting drives. He referred to the time when she crashed one of his cars at over 300 mph and walked away. The only bone she ever broke was in a hand one time when racing motorcycles.

Her land speed record was achieved in December 1976 when she drove the SMI Motivator, a rocket on three wheels powered by hydrogen peroxide. Her average speed was 512.710 mph. Amazingly, she only used 60 percent of the engine’s power and could have gone faster. She wanted to try again, with the goal of beating the fastest man and break the sound barrier. Unfortunately, gender politics prevented her from doing so.

In 1977, O’Neil piloted a jet-powered boat to a record speed of 275 mph, becoming the fastest woman on water. This may have been the only time she was afraid of something, because she said one time was enough. “It’s like driving on ice,” she said. “You can’t control it, but land speed I can control.”

Slowing down and retirement

After colleagues were killed on the job, O’Neil lost her taste for the business. She retired in 1982 and moved to Eureka, South Dakota 11 years later for peace and quiet. Tired of living in L.A., she didn’t like the big city and crowds of people. She fell in love with Eureka, particularly because it was family oriented with friendly people. A quarter of the town’s Pioneer Museum has pieces from her former life.

Even in 2015, O’Neil was tempted to break out of retirement. Jessi Combs was attempting to break O’Neil’s land speed record. O’Neil was proud and happy for her, but said, “If she breaks the record, then I’ll do it again. It’s a challenge.”

Thankfully for O’Neil, Combs was forced to abandon her attempts for the time being. O’Neil’s record still stands.