What are the differences between a child who is deaf and hard of hearing?

Ask Anna: What is the best hearing aid accessory for me?

Have you ever wondered what’s going in your inner ear? How it works? And if, like mine, yours doesn’t work properly, what does this mean for its inner workings and how you perceive sound?

Which aspects of the inner ear did the researchers study?

The inner ear contains the cochlea. The cochlea’s job is to convert sound waves into neural signals, which are then sent to the brain (via the auditory nerve). Inside the cochlea is the organ of Corti  – also known as the ‘spiral organ’), which contains the hair cells responsible for hearing.

Prior to this study in Sweden, no mechanical measurements of the low-frequency parts of ‘intact’ cochlea had been available.

In their study, the researchers used a sort of ‘optical ultrasound’ called ‘optical coherence tomography’ to capture images of the vibration in the (intact) cochlea when low-frequency sounds were played.

What did they find?

“We have been able to measure the inner ear response to sound without having to open the surrounding bone structures and we found that the hearing organ responds in a completely different way to sounds in the voice-frequency range. It goes against what was previously thought of how the inner ear works. This helps us understand the mechanisms that enable us to perceive speech and music. We hope that more knowledge about the capabilities of the ear will lead to better treatments for the hearing impaired.”

More about how the ear works

The cochlea is coiled in a spiral shape. If the cochlea were uncoiled, it would be about 33 mm long in women and 34mm in men. 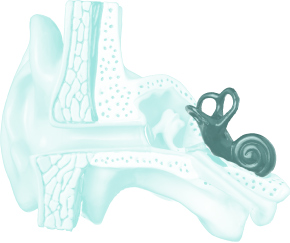 The results have been published in PNAS, the Proceedings of the National Academy of Sciences.