But You Look So Normal

“I don’t hear very well.” This is what I’d been saying since I discovered, age 13, that I didn’t hear very well. “I don’t hear very well.” My hearing was checked, I was given the verdict “yeah, so you have some hearing loss, we’re going to give you hearing aids”, and sent to an audiologist to be fitted. They took some measurements, filled my ears with pink stuff, and next time I went there I left with a rather big pair of skin-coloured inside-the-ear aids.

They felt uncomfortable, I could hear background noise, the world was too loud, and girls at school made fun of me. I wore them two days, maybe three, then put them back in their box, never to be taken out again. I decided that it wasn’t that bad after all to “not hear very well”, and that I would cope.

In 2012, after a couple of years of “getting there”, I finally decided to get fitted again. My brother had got hearing aids a few years before and what he told me of the process and the changes in his life really encouraged me. (We have similar hearing loss, hereditary.) I shared some of my thoughts on my blog right after getting my hearing aids (“A Week With My Superpower”) and a month or so later (“More About Hearing Aids…”).

Nearly two years later, my hearing aids are part of my life, and I wonder why I waited so long. I still end up saying “I don’t hear very well” every now and again, but now I can add “I’m not wearing my hearing aids just now,” or “Even with hearing aids, I don’t hear as well as you.” The impact is different! 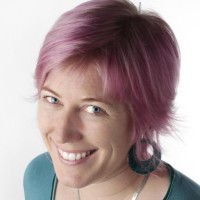 Author Details
Stephanie Booth
Stephanie has been blogging since 2000, and is still at it. Sailing, skiing, judo-ing. Geek with social skills. Freelance consultant, speaker, trainer, thinker. Social media without the hype.
http://climbtothestars.org/
×

Stephanie Booth
Stephanie has been blogging since 2000, and is still at it. Sailing, skiing, judo-ing. Geek with social skills. Freelance consultant, speaker, trainer, thinker. Social media without the hype.
http://climbtothestars.org/