Meet a deaf art director taking the world by storm

How playing in the Deaflympics introduced me to Deaf culture

My experience at the 2017 Deaflympics was an experience unlike any other.

The Deaflympics meets at an intersection of athletic competition, cultural interactions, and Deaf culture. These are people from all around the world who face similar barriers and are also driven by athletics.

I found out about the National Deaf Women’s Volleyball team when I was 15 years old through my volleyball coach at the time.  She wasn’t sure whether I qualified with my hearing loss but still recommend that I try out. I was in luck, I just qualified, meeting 55 dB hearing loss needed to be on the team. The tryouts also luckily happened to be in my hometown of Edmonton at the Alberta School for the Deaf.

Becoming a part of the team

When I found out that made it on the team, I was extremely excited. I participated in my first international competition at the 2016 Panam Qualifiers in Washington D.C. where we qualified for the 21st Deaflympic Games in Turkey the following year.

It was here I got my first taste, and exposure to the Deaf culture by being immersed in it at Gallaudet for a couple weeks. At the Deaflympics is where I got to experience the Deaf culture on a global scale and meet athletes and individuals from around the world who also had hearing loss.

Making our way to Turkey

For an entire year, I couldn’t wait for the Deaflympics. Time ticked on, as we trained for the games and eventually, after a full year of preparation and waiting, it was time. It was time to leave for Turkey.

On the day of travels, we sent selfies of one another in our Team Canada jackets on the planes to our teammates while we were starting our joinery across the country to convene in Toronto and meet the other Canadian athletes for the first time before going together to Turkey.

It was a long flight overseas, and a long six hour layover in the Istanbul airport, and were absolutely exhausted, as we stumbled into the athletes’ village the following morning, after spending the night in the Olympic headquarters and saw the big banner and the hundreds of athletes among us I instantly felt energized again. I thought this is it. I am here now.

Even the interactions with the local people were unique and special in their own way. Usually, they were short and brief, but they still made a lasting impression. One of the most memorable moments was when I was walking next to a field where a bunch of children were playing soccer when suddenly they stopped and ran up to the fence. They were signing ‘I love you’ through the fence, their happy faces grinning up at us. It was a heart-warming moment.

No hearing technology during the games

What separates the Deaflympics from the Olympics, or Paralympics is that it is an Olympic competition for Deaf athletes. It is a celebration of Deaf culture and athletics. Deafness is not a disability, it is a culture and a lifestyle and this is reaffirmed at these international games. Part of this is achieved by not being allowed to wear hearing devices while competing. Which means that I am not allowed to wear my hearing aids.

Originally, I thought that the main challenge would be to hear what my coaches have to say, since I don’t really know much sign, but the main challenge ended up being on the court. Volleyball is such a communication driven sport, where we are constantly chattering to let our teammates know either we are ready to hit, what play we will run, whether the ball is going in or out, whether there was a touch on the block, or whether we are going for the ball.

Deaf volleyball, however, is not played like that. It really tests the trust that we have in our teammates, that they will go for the ball because there is no auditory cue that will reassure them that yes, indeed someone is going for the ball. Or that the ball is going out. There have been collisions, bumps, and miscommunications but we dust each other off, help each other up and go get the next point. That is apart of the Deaf volleyball style. 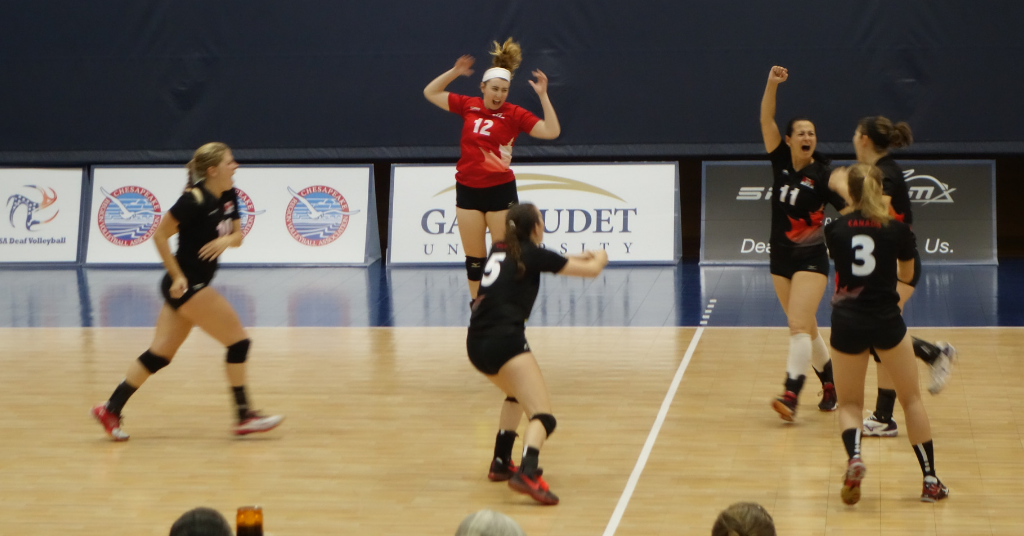 Proud to be a part of the Deaflympics

Opening ceremonies was an unforgettable experience. All of us stood decked out in Canadian gear in the setting sun outside the stadium trying to cool down in Turkish heat. We were clutching our maples leaves with pride going up to athletes to trade pins, or take pictures as we waited for the ceremony to start. Then the ceremony commenced.

As we neared the stage of the stadium, I could feel the vibrations of the music, hear the cheers and echoes from the speakers. When they finally announced the athletes from Canada. I stepped onto the stage among my fellow athletes. What I saw took my breath away. It was a massive stadium with thousands of people cheering us, the Canadians, as we walked down the massive stairs towards them. We walked around the stadium next to the spectators waving to them as they cheered us on. Some beckoned us over to take selfies, and I gave some people some of my many Canadian flags.

It has been such an honor to represent Canada at the 2017 Samsun Deaflympics last summer. It was an unforgettable experience that gave me the opportunity to learn more about Deaf culture and other cultures around the world. Even the small interactions when meeting different people have made a big impact on me. The Deaflympics truly is a fusion of international and deaf culture alongside international competition.

Read more about the Deaflympics here!

Author Details
Madeline Brinkmann
Maddy is 19 and currently in her third year at university studying International Relations. She wears Sky V90 hearing aids in both ears, and has been wearing hearing aids since she was three. In her spare time you can catch her painting, playing volleyball and watching YouTube. Some of her goals is to continue to work for better accessibility at her university and to break down the stigmas surrounding hearing loss.