The Hearing Loss Spectrum, Between the Hearing World and Deaf Culture

How did you lose your hearing?

For some, that question may be considered intrusive and personal. But for most cochlear implant users, it is a great way to start a conversation with another implant user when you meet for the first time. And when the question comes from somebody who doesn’t have cochlear implants, it’s a great opportunity to show off your technology. Allow me to explain.

I grew up with normal hearing, and always enjoyed music and foreign languages, in addition to my career as an engineer and all the geeky interests that go along with it. I met my future bride while studying Japanese. We used to alternate days, taking turns speaking each other’s language.

Nine months after we were married, I was in the shower one morning, and slowly came to the realization that the water wasn’t making any noise. My analytical engineering brain kicked into action, trying to figure out what was wrong with the water. After exhausting all of the possible water problems, I realized that it was probably making its usual sounds, and that I wasn’t able to hear it.

I spent the next dozen years holding an FM microphone, which was connected to a really powerful hearing aid. This helped me read lips a little bit, but I could only use it for about an hour a day before becoming exhausted.

Every once in a while somebody would mistake my microphone for a small cell phone. This was easy; cell phones were pretty big in the 1990s! They would approach me in the airport to ask about the sleek new device. When I told them it was my hearing aid mic, they would usually mumble an apology and slink away in embarrassment.

I received my first cochlear implant in 2005. The surgery was actually fairly minor. I stayed overnight, although most people go home the same day. About a month later, I sat in the activation room with two audiologists, my wife, her mother who was visiting from Japan, and a doctor from China who was observing the process.

After several minutes of making adjustments on the computer, one of the audiologists turned on my sound. I heard beeps, echoes, and whistles, but somehow I could understand speech! One of the audiologists asked what I was hoping to gain from my cochlear implant. I replied that it would be nice to understand Japanese again. She told me to try it. Now? I said something to my mother-in-law, and understood her reply! During the next half hour, sounds became much more natural. And they kept improving more slowly over a few months.

After activation I went to my office, and greeted a colleague in the lobby. It sounded like he had an Irish accent, so I asked if he was from Ireland. He looked surprised, and replied in a strong Irish brogue ‘Well of course I am, didn’t you know?’ We had been working together for ten years, and it took only one short sentence with my new cochlear implant to figure out where he was from.

The first few months with a cochlear implant involves a lot of learning. You hear a strange sound, and try to figure out what caused it. After being told a few times that it was the sound of a car door closing, or birds chirping, the sound itself becomes more natural. It’s almost as if you build up a dictionary of sounds. When you learn a foreign language, you start out referring to that dictionary often to translate words into your language. But after a while, you put down the dictionary, and don’t even translate in your mind. The foreign words just associate with their meanings. And so it is with cochlear implants. With practice, the sounds you hear eventually become exactly what you recall from your hearing days.

Most babies and children who receive cochlear implants get the benefit of Auditory Verbal Therapy (AVT), but adults are often left to fend for themselves. I was fortunate enough to meet a therapist who wanted to develop some new techniques. We met once or twice a month for a year or so. To be honest, I didn’t really believe that practice beyond just using my implant would provide much benefit. But once I saw the dramatic improvements in my scores over time, I was convinced. And that gave me the motivation to practice on my own.

I started by listening to public radio while driving, because they usually speak slowly and clearly. It didn’t take long for me to feel comfortable understanding everything, with the exception of some interviews with people via cell phone, or people who had a heavy accent.

At that point, I switched to AM news radio. They speak much more quickly, so the challenge escalated. It didn’t take long before I could understand the traffic and weather reports! Music, however, remained elusive. I could hear the rhythm easily, but melody, harmony, lyrics, and different instruments were all just noise.

In 2007, I dove in with both ears, and got a second implant. At about the same time, the manufacturer of my implants (Advanced Bionics) released a software upgrade that made a dramatic improvement in my ability to hear music. Before the upgrade I may have been able to recognize a song about once per week. With the super-charged software, the game changed to how quickly I could identify each song. Things spiraled out of control pretty quickly – I got an iPod, then upgraded the car stereo. And when I bought my next car, I opted for the fancy sound system!

You can probably sense my excitement and enthusiasm about my cochlear implants. This is very common. When cochlear implant users get together, such as at a convention or a local support group, we tend to hang around long afterwards sharing stories, until we get kicked out by the management.

Perhaps I’ve gone a bit further than most enthusiastic recipients. Along with several other cochlear implant users, I created the web site Cochlear Implant HELP to help people at all stages of their cochlear implant journeys. Bookmark the site — it contains lots of information, and it is updated frequently.

When somebody approaches me on the street to ask about my hardware (these days it is sometimes mistaken for a Bluetooth headset) or my hearing, I seize the opportunity to show off my gear. At the very least, they are amazed that the technology even exists, and at how well it works for me. And the best situation is when they mention that they, or somebody close to them, just isn’t getting much benefit from their hearing aids. I love to help them start investigating cochlear implants, and watching as they transform from social isolation and depression to regaining the ability to communicate with family, friends, and colleagues.

Being bilateral (having two implants) allows me to take one sound processor off and explain how it works. The first thing to notice is that there is no ear mold, and nothing plugging the ear. In place of the hearing aid tube, there is a microphone on a thin, flexible extension, right at the entrance to my ear. This is how ears are supposed to work! Telephones and headphones are used in exactly the normal manner. The shape of my outer ear focuses sound naturally, which helps in noisier situations.

The sound goes into the body of the processor, where it is prepared to be sent to the implant. Because Advanced Bionics is a sister company to Phonak, Advanced Bionics cochlear implants have access to lots of great features formerly only available in Phonak hearing aids. My processors were the first cochlear implant processors to include wireless features, enabling me to make phone calls via Bluetooth, control both processors by pressing buttons on either one, and to hold the phone to one ear, and hear the sound in both.

The battery (rechargeable or disposable) provides power not only to the sound processor, but also to the implant itself. The headpiece is held on with magnets, and serves as an antenna to send power and sound to the implant. The implant then receives the information, and stimulates the cochlea with tiny electrical pulses. And somehow, my brain interprets those pulses as sound. Simply amazing.

With a hearing aid, the goal is to provide enough amplification to overcome your hearing loss. When your hearing loss is significant, you can feel the hearing aid shouting in your ear, but comprehension may still be elusive. And we are all familiar with the feedback squeal, although modern hearing aids are getting better at minimizing that.

With a cochlear implant, you get plenty of sound, and the challenge is to learn how to interpret it. Nothing is in your ear, and there is never any squealing or feedback. For me, hearing with a cochlear implant is completely natural, and not stressful at all. I don’t have to focus intensely to understand speech, and I don’t have to concentrate on the person’s face, filling in the blanks with context, etc. I put on my sound processors in the morning, and take them off when I go to bed. There’s never a need to take a break.

One additional benefit that many cochlear implant users enjoy is a reduction, or even complete elimination, of tinnitus. When I am wearing my processors, I have no tinnitus at all. When I take them off at night, the tinnitus comes back, but at a much lower level than before I received my implants.

I lost my hearing due to sudden sensorineural hearing loss (SSHL), with no cause ever determined. That opened up a whole world of opportunities for me, including the ability to share my experiences and to help others, particularly through Cochlear Implant HELP.

So, how did you lose your hearing? 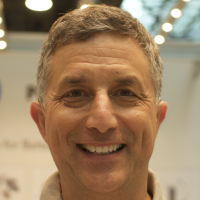 Author Details
Howard Samuels
Sorry! The Author has not filled his profile.
×

Howard Samuels
Sorry! The Author has not filled his profile.

How to pair Phonak Marvel hearing aids and amplified stethoscopes

How Phonak Marvel hearing aids are transforming my life