Listening to music with hearing aids (or, why I choose Adele over TSwift)

Open Ears is following a group of Sonova team members as they head to Haiti with the Hear The World Foundation. Jason Norby is a Principal Clinical Specialist at Advanced Bionics LLC. He enjoys sarcasm and long walks in the park. His favorite dogs are puppies, and his favorite color is light tan.

It’s the end of a long work week. I could feel it in the part of my brain that logs hours slept versus hours awake and energy expended. The summary: not enough sleep to offset the hours awake and energy consumed. It’s been a long week. But you know the feeling when something was mentally and physically taxing, yet the intrinsic reward was worth the cost? It was that kind of week and very worthwhile. The day started with a trip to a school atop a Caribbean mountain to fit three children with hearing aids. The school sat overlooking the coast and green hills nearby. We made this trip to the school earlier this week. The drive  earlier this week up the rutted dirt road was epic with bouncing and jostling for several minutes, and the occasional sound of wheels loudly rebelling as they tried to gain traction. The small four-cylinder engine strained in rebellion to the load and incline. Today however, the dark clouds more than hinted of rain. It wasn’t even a question, Cathy Jones, our trip director, flatly said, “We aren’t driving up the mountain because if it rains, we will be in trouble.” Instead, a handful of us donned our backpacks filled with audiology supplies, full water bottles, and power bars that lost their appeal many days before thanks to necessary indulgence, (aka too many power bars for lunches, snacks, and after-dinner “desserts”). Cathy prepped us only by saying, “It’s hot and steep, and we may take a break half-way up.” “May” being the operative word. “See you later! Don’t die hiking up,” Michael Lumunsad said, as he decided to spend the morning in the café at the bottom of the hill sipping on his freshly made mango smoothie. The strenuous climb up the dirt road gave a close-up look at the smiling faces of the locals walking down the road with a friendly but quick, “r.” Quaint homes with grazing goats caused us to pull out our cameras and capture the moments. We arrived to the light green metal gate sweaty and out of breath. The guard slid the metal locking pin and let us in. We did our jobs efficiently and the children were visibly happy to hear better than before.

As we were leaving, we were informed that a teenage girl we fit with hearing aids earlier in the week was not wearing them, and had apparently not come to school because of the stigma of wearing hearing aids. As in the United States, it appeared that cosmetic appeal was also an important facet of accepting hearing aids. Although we lived in different countries, we were more similar than different. We said our good-byes to the students and school staff, and we left through the green metal door. The sun peeked out from behind the clouds and we were immediately dripping-sweat-hot. The good part was that our trip was all downhill.

Just as we came to the steepest section, we saw the newly-fitted teenage girl coming towards us. We stopped her with our not-so-native “Bonjou” greetings. She smiled and shook our hands. With the help of John, our historian/driver/comedian/fixer, we found out that in fact, she loved her new hearing aids and had missed school to finish her homework that was due. She thanked us and there on that dirt road, we performed her hearing aid counseling that would normally be reserved for a clinic office with air conditioning. Our second and last stop of the day was to a children’s group home. There were two young children we fit with hearing aids based on hearing test results from earlier in the week. The academy has dozens of children of all ages. They greeted us with waiving arms of excitement. Several children gathered around each of us and asked our names with sign language. For the few men in our group, they pulled on our arm hair. During our two hours there, it occurred to me that we were ending our last day of service in Haiti.

Haley B. Kurzawa getting her hair braided.

Jenn Anyegah posing with some of the older students from the group home.

There were many children we assessed and helped with hearing aids. Many smiles, many sincere “Thank Yous” expressed in sign language, Creole, and hugs. But, there was still much more to do. There were more children to help and serve. This brought me feelings of anxiety and the urgency to do more. Suddenly, a story came to me that I read some years ago. The gist of the story was about a man walking down the beach in the peaceful morning hours. As the man strolled along, he came upon a young boy picking up objects on the shore and throwing them into the ocean. Curious, the man continued toward the beach and the boy. As he approached, he saw that the boy was throwing starfish into the ocean. The starfish littered the beach for as far as he could see. He asked the boy what he was doing. The boy said, “I’m saving the starfish by throwing them back into the ocean”. The man scoffed and said, “Boy, there are hundreds of starfish on the beach. You can’t possibly save all of them. You can’t make a difference.” The boy picked up a starfish and threw it into the ocean and said, “I made a difference for that one.” I must admit, I started the week like the man in the story; skeptical about making a difference. However, I realized there in the group home surrounded by these fantastic, grateful children, that I’ve ended the week sharing the feelings of the boy. I made a difference for the ones I helped, even though I’m exhausted. It’s a good kind of exhaustion. 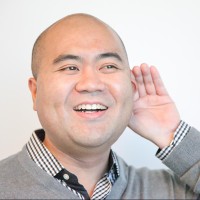 Author Details
Michael Lumunsad
Sorry! The Author has not filled his profile.
×

Michael Lumunsad
Sorry! The Author has not filled his profile.

These deaf TikTokers are worth following

A brief history of Black Deaf people in America

What is ‘Deaf Gain’ and ‘Deaf Identity’?