What Is Waiting For Us Around The Corner

From A Hearing Aid To A Cochlear Implant 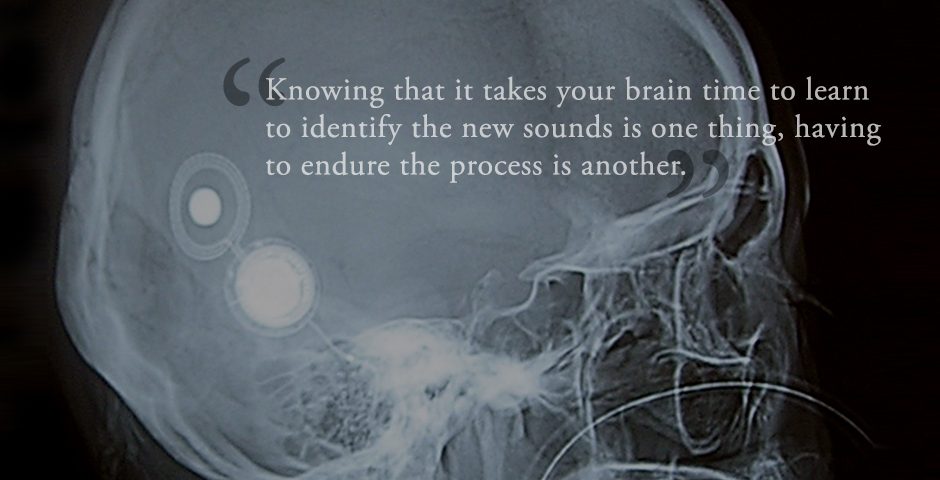 Wearing hearing aids is as natural to me as wearing clothes.

I was born hearing impaired and as far as I can remember I always had hearing aids; they were just an extension of my body. In my early kindergarten years it was a box I had to carry on my chest. Ear plugs were connected to it with long cables. In hot weather, this box became quite uncomfortable to wear. Surprisingly the amount of sweat pooling underneath it never caused it to short-circuit.

Fortunately, as soon as I hit elementary school age, I was given behind-the-ear hearing aids. Those were a huge improvement and I have been wearing those types of hearing aids up until a few months ago.

My hearing loss has sadly been deteriorating over the years, up to a point where it was getting really hard to get the most out of a hearing aid. I had heard about cochlear implants earlier on, but back then I found them to be a rough technical solution. Like all technological inventions, however, cochlear implant technology is being continuously refined as time goes by.

As any technology has its limits, choosing to get a cochlear implant remained a hard decision. I have a good friend who got an implant a year ago and is showing remarkable performance, but that does not mean the same will occur with me or with anyone else.

The benefits of a cochlear implant vary greatly per person. It depends on your hearing history, your age, your language capabilities, your own personal investment, your social environment, and so forth. People who have lost hearing suddenly will profit more from a cochlear implant compared to those who were born with hearing difficulties. Deaf children with an implant will do better than deaf adults who just had a cochlear implant. If you are in an environment where sign language is the dominating communication tool, having a cochlear implant might provide some way to discern sounds, but will probably not improve oral communication.

In my case, getting a cochlear was in the end quite a straightforward choice. My elementary school was a special school for hearing impaired children where oral communication was the only option. Speech therapy sessions where given almost daily. I was lucky that my speech therapists were always very skilled and friendly. I looked forward to those sessions, did my best practising speech reading and articulating, fishing for compliments.

It paid off as my speech reading skills have been amazing people over the years, provided they either speak Dutch of English. Japanese is still hard for me and French I find near impossible, considering how they just smash words together in one continuous flow of sounds. Not only did I grow up using oral communication, from my teenage years on I was always in a hearing environment. Schools, universities, work places, none of the people I was with used sign language.

Deciding on which type of cochlear implant to get, now that was much harder. I have a doctor’s degree in Cognitive Psychology, with a specialisation on computation models of cognition. So I was obviously not just going to have the audiologist pick one of the three major brands of cochlear implants randomly. I spent months researching the various types. I even purchased the “Programming Cochlear Implants” book by J. Wolfe and E. C. Shafer. I communicated with people like Mike Marzalek, a retired Hewlett-Packard engineer, who had reverse-engineered his implant to make it perform better.

In the Netherlands, adults only get one implant covered by their health insurance. Children under the age of 8 get two. As luck would have it, the academic hospital I went to is conducting research into the benefits of having bilateral cochlear implants, in order to provide health insurance companies with irrefutable proof that their coverage restrictions are unfounded. I was invited to join the research, which meant that I will be getting a second implant in due time, and also simplified the question of which type of cochlear implant to go for: having two cochlear implants obviously – for me at least – outweighs having only one.

It is a long process from the moment you decide to get an implant to the day they switch it on. The medical team of the hospital you visit has to ensure you are fit to have one, so they will check your auditory history, your psychological and sociological state. An MRI- and a CT-scan will be taken. There will be tests for your current hearing and your vestibular system. Once the medical team gives the green light and an implant is selected, surgery takes place. In my case, surgery took six hours and required an overnight stay at the hospital. I had no pain whatsoever afterwards, which could be an exception. An MRI scan made after the surgery showed the electrode neatly coiled into the cochlea, penetrating quite deeply. A remarkable achievement by the surgeon.

After surgery I had to wait a month before the implant was switched on. The affected tissues had to be given enough time to heal. What I found hard, especially since I love good food, was the loss of taste on the side of my tongue close to my implant. It made all food taste like rubber. Fortunately, your normal taste sense will return, but it may take up to two months.

Even though I did a lot of research and read the “Programming Cochlear Implants” book back and forth, nothing could have prepared me for the moment they switched on my implant. At first, the audiologist did a test to determine my most comfortable levels. In that test, each contact in the electrode embedded in my cochlea was sent pulses of increasing magnitude, up until it was too loud, and then lowered it to the point I felt the evoked sound was comfortable to hear.

But as soon as the microphone is activated and all sounds come in, it was nothing like what I was used to with my hearing aids. My hearing had been deteriorating to the point that sounds above 2000 Hz were hard to perceive, but with the implant you get the full spectrum back, from 100 to 8000 Hz.

Knowing that it takes your brain time to learn to identify the new sounds is one thing, having to endure the process is another. I found the first week after the implant was switched on hard, for I was hearing sounds everywhere but could not readily place them. My hands rubbing on my sleeves, running water, breathing, birds singing, the wind blowing. Of course, it is great to be able to hear that (again or for the first time), but initially it’s a bombardment on the hearing sense. The key is to remind yourself that it will improve and to keep the implant on. In the first week, I had three appointments with the audiologist (fitting sessions), to readjust the programming of the implant.

After the third fitting session I was comfortable with my implant and already feeling like there was no way I would go back to my old hearing aids. That feeling was reinforced by the progress I was making in the speech therapy sessions, which ran parallel to the fitting sessions.

The speech therapist would initially do exercises where I had to try to hear a word within a given context. For example, if the context is “furniture”, I would be able to hear “table” easier. Once I could do that well, the therapist would utter sentences, again within a context. Keep in mind that the therapist will be covering his or her mouth during all this, so speech reading cannot be used. In the next phase, the therapist leaves out the context. The final exercise is the therapist reading aloud a news article, which I would have to repeat. I was excited that I was able to do that. Of course, it was in a quiet room and the therapist naturally articulates incredibly well, but compared to how I fared using normal hearing aids, this was a massive improvement.

I also practiced a lot at home, either by myself or with family and friends, even with a couple of iPad apps like ABle Clix. Every evening I would plug my cochlear implant into my laptop and watch TV shows, trying to rely on hearing instead of captions. I personally really enjoyed the BBC’s “Jonathan Strange & Mr. Norrell”, not only because of the brilliant story, but also of the eloquent English that is spoken.

It has only been two months since the implant was activated, so I think I still have some way to go before my performance will hit the proverbial ceiling. It is an interesting journey and I will be making the most of it. 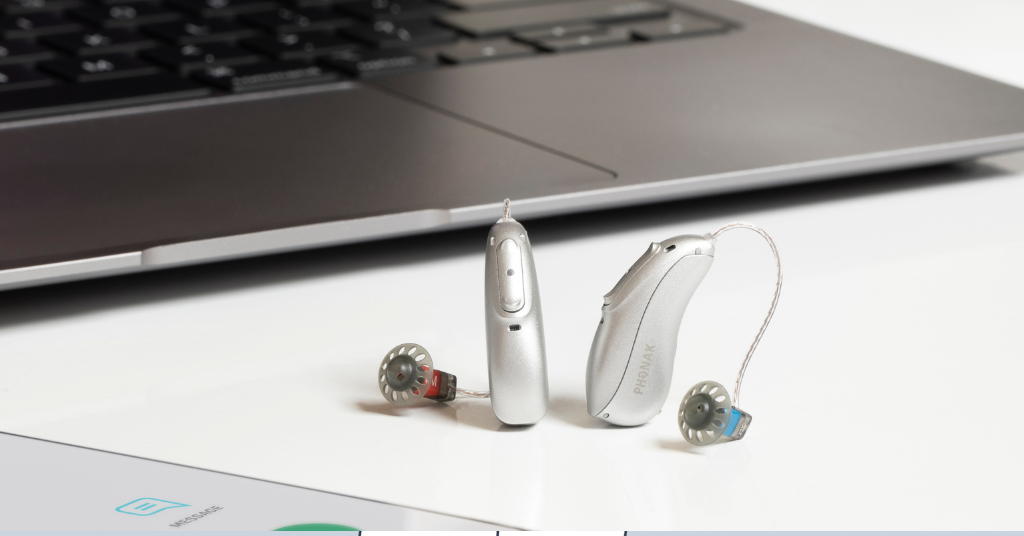 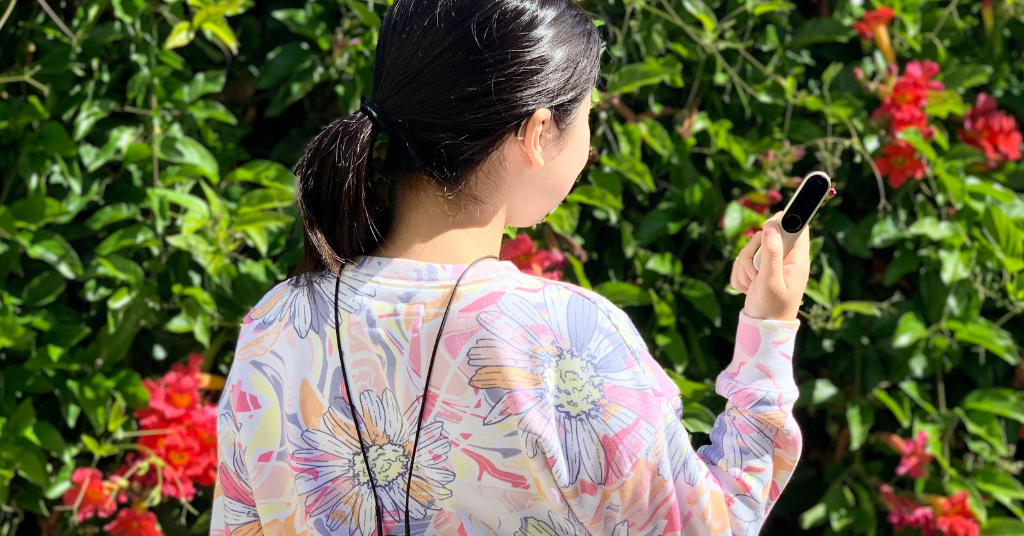