How one couple finally found a hearing aid that works

After years of having difficulties hearing, a couple from Horsham, England finally decided to see an audiologist for a second opinion. What happened next they say, opened up a whole new world.

It was a simple wax removal that finally brought Mr. and Mrs. Burt first to South East Hearing Care Centres.

“We found [the hearing center] on the internet whilst we were looking for somewhere that did micro-suction wax removal,” Mrs. Burt says. “That’s how it started.”

Finding a hearing aid that works 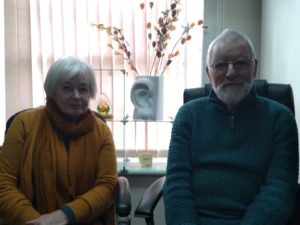 While at the clinic, Mr. Burt knew he wanted to ask about his hearing loss. But he was nervous because of his past experience with hearing aids.

“I’ve been hard of hearing for several years,” he says. “Initially I had NHS hearing aids which at that time weren’t very useful for me as I’m a great outdoors person and the aids were forever getting blocked with condensation. Then, we went somewhere else and were with them for nearly four years, but I felt I needed to move forward to improve my hearing.”

After all the trials with sub-par hearing technology, Mr. Burt finally took the chance for a second opinion. He asked Patricia at South East Hearing Care Centres what his options were. While in-the-canal hearing aids such as Phonak Lyric are one option for the issue Mr. Burt had with condensation, his audiologist ended up suggesting the Phonak Audeo Marvel 90 RT.

“Getting the right hearing aids like these Phonak Audeo Marvels, it just changes the whole situation,” Mr. Burt says.  “You look forward to people coming over, rather than thinking to yourself, ‘Oh, I’ll just go upstairs and hide.’ To be able to participate in conversations and social gatherings is incredible and so rewarding after many years of sitting on the periphery and not understanding what is going on.”

The impact of hearing loss on family members

Mr. and Mrs. Burt have several grandchildren, ranging from infants to a15-year-old.

“When they are all around it is a bit chaotic in the house,” Mr. Burt says. “We can have about 10 to 14 people at any one time. Previously it’s been hopeless because I used to take people to one side to have a chat but recently I have been able to sit down with everyone and follow the conversation immediately, so it’s made a remarkable difference to my hearing and how I feel about where I am.”

“It’s made a remarkable difference to my hearing and how I feel about where I am.”

Now, with his new hearing aids, Mrs. Burt says everyone has noticed a positive change in Mr. Burt’s hearing.

“It’s great because not only can I participate in a conversation, but they actually want to participate with me,” Mr. Burt says. “The problem is, if you’re deaf, people expect you to sit there and not say anything. To be able to participate in conversations and social gatherings is incredible and so rewarding after many years of sitting on the periphery and not understanding what is going on.” 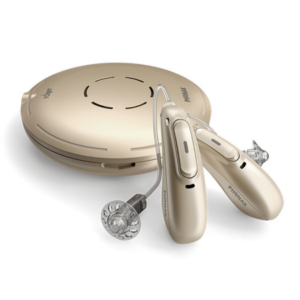 By utilizing multiple microphones in six directions, the Roger Select picks up speech in 360° settings, allowing group conversation in background noise to be understood up to 61% better than with hearing aids alone.

“The Roger Select microphone has made the largest difference,” Mrs. Burt says. “We’ve also used the table microphone, in a pub that we visit quite regularly with some friends for lunch. Admittedly, the pub wasn’t very noisy but the table mic made an absolutely astronomic difference to Ian and his ability to stay with the conversation with four people, which in the past we found quite difficult in that I would have had to keep Ian up to date with what we have been talking about. We also took it to a very noisy restaurant and I wore the Roger select on my cardigan and we could talk to one another and we haven’t been able to do that for a very long time, it was wonderful, it was great.”

“…we could talk to one another and we haven’t been able to do that for a very long time, it was wonderful, it was great.”

Mr. Burt says the change in his life with his new hearing aids have been “remarkable.”

“It has opened up a whole new world,” he says. “It benefits me and everyone I come into contact with.”