How my hearing loss is shaping my travel experiences

Mom finds hearing loss support for her son on Instagram

‘Nailed It’ contender proves deaf people can do anything, even bake badly

Megan Swanson wanted to step out of her comfort zone. She’s used to being behind the camera, but figured she should be more daring.

She adopted this mindset three years ago when she moved to California from Chicago without a job or a lease. It took her only two weeks to find work, which says a lot about Swanson’s determination.

This is how Swanson found herself on a reality bake-off competition called Nailed It!, which debuted on Netflix on March 9, proving that deaf people can do anything, even bake badly.

Netflix describes the quirky game show as being part reality contest, part hot mess. The network sums it up in one sentence: “Home bakers with a terrible track record take a crack at recreating edible masterpieces for a $10,000 prize.”

Audition for ‘Nailed It’

Swanson, who has a profound, bilateral sensorineural hearing loss, happened to be in the right place at the right time. She was working on the set of “Dance Moms” when the associate producer, who also worked for a casting agency, asked her to audition for the show.

The audition process involved her making a video of her cooking/baking and writing about her story. She had just won California Miss Amazing 2017, so she talked about what it’s like for her in the industry.

“Many of us do struggle in finding jobs,” she says. “While it’s hard in general to find a job in the film industry, it’s twice as hard for someone like me.”

The producers were excited about Swanson’s story; they loved her passion and motivation. During the Skype interview, Swanson says she talked about her experience, why she loves to bake, and why she wanted to be on the show. She asked for a chat window to be open during the interview and had a friend texting her on the side to supplement her lipreading.

“They were more than willing to accommodate me,” she says. “They wanted to hear about everything.”

Preparation for the show

Once Swanson found out she would be appearing on the show, she requested a sign language interpreter because she knew that it would be crazy on set with many cameras and people with directions. While she knows basic sign language, she says she also knows how to read lips.

“Just having [the interpreter] there calmed my nerves because I knew if I missed directions or anything, all I had to do was look at her,” Swanson says.

Swanson didn’t really do much to prepare for the show. She had to figure out what to wear and how to do her hair and makeup, but that’s about it.

“I was pretty clueless,” she recalls.

The show was nerve-wracking, and it didn’t help that Swanson was anxious. She kept holding her hands together to calm herself down, which is why you can see her holding her hands as she walks onto the set in the beginning.

Swanson stars in Episode 4, “Weird Science,” which Netflix describes as: “Contestants loosen up a food scientist with a cupcake-cocktail pairing before serving him questionable slices of a bubbling volcano cake.”

“I was born deaf and I’m the tenth child in the U.S. to receive the cochlear implant,” Swanson tells the camera in her introduction. “So my whole life I’ve been told I can’t do that, I can’t do that. But pretty much everything that people told me I couldn’t do, I did – did it anyway. I really do love baking, but I definitely wish I was a little bit better.”

“So my whole life I’ve been told I can’t do that, I can’t do that. But pretty much everything that people told me I couldn’t do, I did – did it anyway.”

After the host welcomes her, she notes that Swanson brought an interpreter. Swanson acknowledges this and then says, “She makes me feel more comfortable. Because I can hear, but I can’t hear 100 percent.” 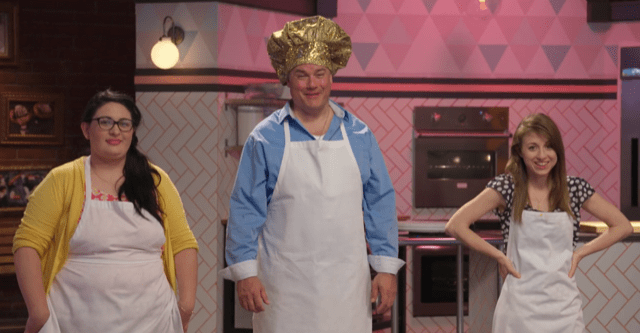 Later in the show, Swanson says that baking is a creative outlet for her. She gets tasked with a tequila sunrise cupcake cocktail combo, which means she has to make her first cocktail ever. You’ll have to watch the show to see how she fares.

When asked if she was able to follow everything, Swanson says she was, for the most part.

“But the fact that we only had so much time [meant that] I did freak out on the inside; I was forgetting things,” she says.

Swanson said she had an amazing experience on the show, and it was tough keeping it a secret for many months. Once the air date was announced, she was able to break the news. Since then, she’s had an amazing amount of support, with non-stop congratulations and encouragement on her social media accounts.

The biggest surprise has been the texts or messages from people who didn’t see her announcement about the show and just happened to watch it. She’s been recognized in public.

“It’s amazing to see how many people watched this show and it makes me so happy they all enjoyed it,” she says.

If you’re interested in being on the show, Swanson has some advice:

Because the show essentially challenges home cooks to recreate professionally made novelty desserts, everyone is pretty much set up to fail but they all seem in on the joke, as a Common Sense Media review so succinctly puts it. The show isn’t shy about featuring home bakers with a “terrible track record,” the same review says.

This didn’t bother Swanson at all. She knows she’s a good baker when she doesn’t have time pressure.

“After working in television, I’ve learned to worry less about what people think of me, and have fun,” she says. “Most of it is real, but think about it. The show is 33 minutes long. We had 45 minutes to make the cupcakes and cocktails, and then two hours to make the bigger cake. You didn’t see everything. Practice makes perfect. I am definitely better [at baking] than I was a year ago.”