Makenzie McGuire has always loved horses. As a child, she enjoyed learning about them in books, and now the 21-year-old is an equestrian in her junior year of college.

But McGuire, who is also deaf, is on a journey to raise awareness of accessibility and community among deaf equestrians. The bilateral cochlear implant recipient recently started a Facebook page called Deaf Eventing to let people into her daily life and follow her journey.

When Makenzie was two years old, doctors discovered an enlarged vestibular aqueduct (EVA) was gradually eliminating her hearing. The genetic condition, called Pendred syndrome, led to her being profoundly deaf in both ears.

McGuire says she adapted easily to routine and continued to pursue her passions. When she was a high school sophomore, she began riding horses in her hometown of Alabaster, Alabama. That Christmas, she asked for riding lessons. Her parents thought it would be a one lesson package, but McGuire had found her passion. She knew this was what she wanted to do with her life.

“I would ride once a week,” she says. “I would read everything and anything I could on horses.”

She started working at the barns, which allowed her to become more hands on with horses. “This helped me learn to understand the horse even better on the ground, which is essential to any under saddle work,” she says.

Eventing for the Win 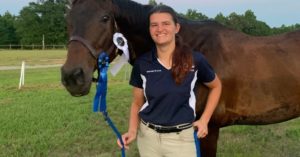 During high school, McGuire competed with the local 4H Horse Club and in some Western Dressage shows. She changed from Western to English, and was hooked after her first Eventing lesson.

“Eventing” is commonly referred to as three-phrase events. It is one of the most intense disciplines in the equestrian industry, McGuire says. The competitions consist of three phrases: dressage, show jumping, and cross country.

In college, McGuire found a local Eventing barn. She began actively competing in the spring semester of her sophomore year, when she had a working student position at her barn.

“My goal in the equestrian industry is to become a professional equestrian training horses in the Eventing discipline,” she says. “My lifelong goal is to be one of the first, if not the first, deaf equestrians to complete in the Olympics and international events in Eventing.”

When McGuire competed in Western Dressage, she entered 4-8 competitions a year. The number was dependent on the distance and her schedule. Now that she’s competing in Eventing, she competes more frequently – usually one or two competitions a month.

The biggest challenge with being a deaf equestrian is figuring out the best way to communicate with the instructor during lessons, McGuire says.

“The biggest challenge with being a deaf equestrian is figuring out the best way to communicate with the instructor during lessons.”

There are challenges in competitions, of course. In the warm up ring, your number is called when you’re “on deck,” so typically McGuire’s trainer listens for her and then gives her a signal when she’s called. If McGuire is warming up by herself, she informs the person working the gate that she’s deaf so they can give her a signal. Once in the ring, there’s an audible signal to let competitors know when to start. For Dressage, you take a lap around the ring and say good morning to the judge. This is when McGuire informs the judge that she’s deaf and needs a visual signal. 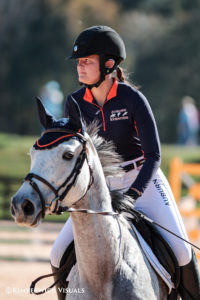 In show jumping, a buzzer is used. McGuire watches the timer, because once the timer starts counting down, she knows when to go. For Cross Country, she makes sure to inform the jump judge at the start before her run begins. That way, if the jump judges throughout the course need to stop her for any reason (a loose horse, for example), they know to utilize a visual signal.

Results are usually posted online, and for the recognized Horse Trials, they’re updated online in real time. No need for accommodations here!

McGuire isn’t the only deaf equestrian, but she’s met a few on social media. While she doesn’t know how many of them there are, she thinks they’re few and far between – especially professionally. She hasn’t heard of anyone who is deaf and in the Eventing discipline professionally.