Why TV is good for people with hearing loss

Thinking About Schools for my Deaf Child

Cici Gregory was born to dance. But her body wasn’t.

Doctors feared Cici would not survive, but as her parents prayed and hoped for the best, they even played her music through a tape recorder in her isolette while she fought for life in the hospital, the tiny baby made big plans to the beats.

After her early birth, Cici’s parents knew she could have health issues. While she was in the NICU, a nurse discovered that she’d developed blood clots. In addition, she was on a breathing machine called a high-frequency oscillator. Although this machine was helping her breath, her lungs collapsed and the oscillator blew a hole in the lining of one of her lungs, resulting in emergency surgery to receive chest tubes. To this day, she still bears the scars.

“We thought we’d lose her a couple of times,” her mom says, reflecting on the difficult time.

Her parents lived with constant stress and anxiety, worrying and waiting to hear that their little girl would be okay. Cici was eventually able to go home, but was still so small that she could only wear Build-A-Bear clothes.

“Cici was eventually able to go home, but was still so small that she could only wear Build-A-Bear clothes.”

And as everyone who knows Cici has come to understand, she quickly overcame the odds and as time went on she became stronger and healthier.

Music in her heart, but not always in her ears

Music has always been a part of the Gregory family, especially to mom, Latisha.

When Cici was in the NICU her parents wanted the newborn to be surrounded by soothing music, so they streamed recordings of music and their voices for her as she lay in her isolette.

“When Cici was in the NICU her parents wanted the newborn to be surrounded by soothing music, so they streamed recordings of music and their voices for her as she lay in her isolette.”

Around 6-7 months old, Cici’s parents sensed something was wrong; she didn’t seem to be responding to their voices.

She did, however, respond to music.

Her parents were told by the doctor to keep waiting another 8-12 months to see if she starts speaking, but that did not sit well with Latisha.

“I knew something was not right,” she says.

So instead, Latisha continued reaching out for answers. Eventually, she contacted schools for the deaf in St. Louis, and it was confirmed that Cici had hearing loss.

Because of the severity of Cici’s hearing loss, the Gregorys were faced with the daunting decision choosing between a Cochlear Implant or continuing with hearing aids. They chose a cochlear implant in one ear while keeping the Phonak hearing aid in the other. While they didn’t know what to expect as a result, as soon as her hearing technology was activated, they knew they made the right decision.

“As soon as she was activated, she was happy,” Latisha says with her relief still evident. “She had a look on her face that said, ‘okay I am good.'”

Read more: How we decided to fit our baby with a cochlear implant

Cici is now 15-years-old, and her biggest passion is dance.

She started dance competitions when she was just six years old and her accomplishments so far are a testament to her and her family’s determination to help her succeed.

Aside from often being the youngest dancer in the one of the local dance companies, she  has often earned solos, was selected to train during the summer at Dance Theatre of Harlem in New York City, and has appeared on the children’s TV station, Nickelodeon. She has also performed in “Hairspray,” and  “Beauty and the Beast,” at The Muny in St. Louis.

But with every accomplishment came challenges Cici had to overcome. 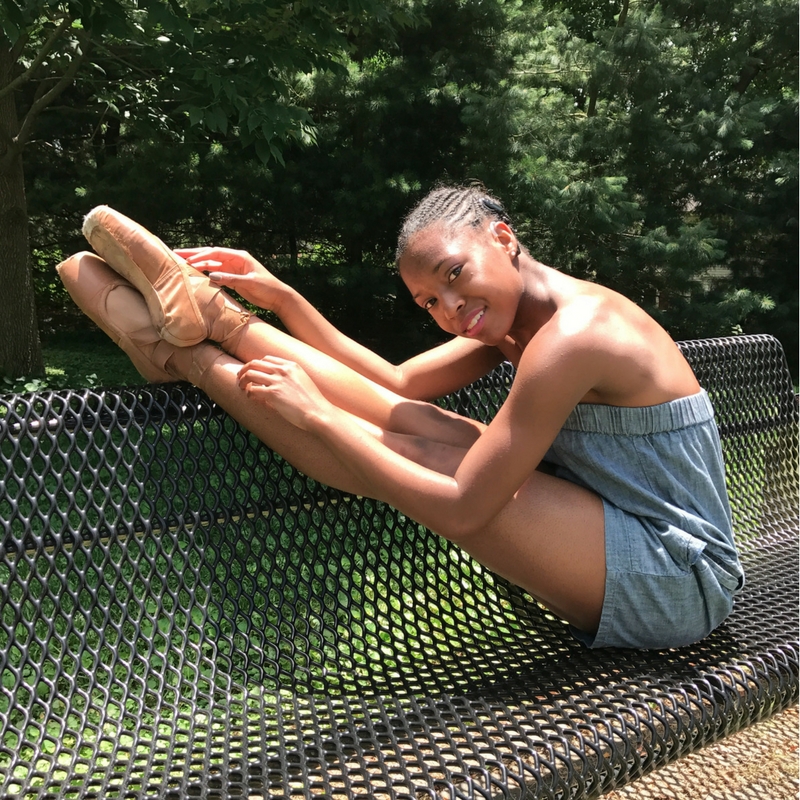 One challenge Cici faced when she started dancing with her hearing loss was during tap dancing. Hearing aids are designed to minimize loud impulse sounds, like the signature tap of tap shoes, so she couldn’t even hear her own taps to know if she was doing the correct moves.

She talked to her audiologist and speech pathologist and together they came up with a solution: They strapped a Phonak Roger Clip On Mic to her shoe so she could hear her own taps and make sure that she was on the rhythm.

Cici could hear most of the music with her hearing technology, but when she had one of her biggest solos, she realized she couldn’t hear the subtle transitions of  the high-pitched classical music notes to stay on count.

“The first time I practiced my solo, they turned the speakers on so loud that it hurt the other girls’ ears, but for me I said, ‘I think I can hear some of it,'” she says. “After a few practices, I was so hard on myself because I didn’t hear the music as well as the other kids.”

To address the issue, the production team at her dance school worked with her audiologist and connected the Roger Touch Screen Mic to the speaker, so the music would stream directly to Cici’s receiver. She was even able to go backstage for wardrobe changes and still be able to hear the music.

“That was so much better, I felt more confident with the musicality and it just brought the whole show to life.”

Advocating as a deaf dancer

Advocating in the dance studio is important for Cici and her parents, who are now well-versed with the trials and tribulations of dancing with hearing loss.

From loud music, to the acoustics, the listening conditions often aren’t ideal. The Gregorys are always on the lookout to make the environment better for Cici’s dancing, and she is learning how to advocate for herself.

“You have to find the balance,” her dad, Montoya, explains. “I am learning as much as I am teaching.”

Cici’s mom has also explained how important it is to not impart fears as a parent onto your child; “It is okay to let them fail,” she says. “They won’t learn and grow if you don’t give them the opportunity to try things out and experiment on their own.”

“It is okay to let them fail,” she says. “They won’t learn and grow if you don’t give them the opportunity to try things out and experiment on their own.”

Cici’s way of self-advocating is by asking questions and speaking up when she missed what someone said. “Sometimes I think, am I being too annoying for asking all these questions?” she says. “And then I’ll tell myself, it’s not annoying because you don’t want to be quiet and then you’re questioning yourself. You just need to ask the questions to know what you’re doing.”

Cici dreams of following her passions to be a professional dancer. She also strives to be a source of inspiration to other dancers with hearing loss.

“I really want to inspire other kids, specifically hard of hearing and deaf kids, to go after their dreams,” she says. “I hope they know they can do what they can with what they have. If there’s a challenge, there are ways to work your way around it.