‘The Bachelor’ finally has a deaf contestant

During important events and breaking news it’s necessary for everyone to have equal access to information. The COVID-19 pandemic is one such topic that needs to be communicated to all people around the world. However, the Deaf and hard of hearing sometimes miss out on important information because the lack of sign language interpreters.

Stewart-Taylor, a freelance consultant and writer, says she decided it was time to take action back in March, shortly after the pandemic began.

“I knew something bad was going on, but I couldn’t understand what and how bad it was,” she says. “I felt sick with panic and worry. Had there been a sign language interpreter available while watching the news live on the platform, it would have given me the information I needed to keep myself and my family/friends safe.”

That’s when she began the #WhereIsTheInterpreter campaign. The goal of the campaign is simple: Make it mandatory that the UK government provide equal access to information about coronavirus.

“I knew something bad was going on, but I couldn’t understand what and how bad it was.”

British Sign Language (BSL) follows a different grammatical structure to English. For users whose first language is BSL, reading English subtitles is like reading in a foreign language. Currently, BSL interpreters are only available on the BBC news channel and BBC iPlayer. This means people who don’t have access to broadband or social media miss out on vital information.

After receiving numerous complaints about the lack of interpreters, the UK government left it up to individual TV broadcasters to make the information accessible in BSL.

#WhereIsTheInterpreter campaign simply asks for the government to have an in-house interpreter standing next to the person speaking. This would be broadcasted on all channels.

Currently, deaf people have to try to get this information in other ways. This ranges from another channel, friends and family relaying it to them, and deaf organizations translating it at a later stage. This results in frustration, worry, and unnecessary panic, which impacts their health and well being.

Vicky Foxcroft, MP, asked UK Prime Minister Boris Johnson on October 12 if he was going to have a sign language interpreter at his press conference later. His response was, “I doubt that we will get one in time.” As Foxcroft tweeted, “For once I got a straight answer, but apparently there is not enough time to arrange one…Not good enough when people have been asking for this for months.”

Asked @borisjohnson if he will have a sign language interpreter at his press conference later. For once I got a straight answer, but apparently there is not enough time to arrange one… Not good enough when people have been asking for this for months. #covidbriefing pic.twitter.com/IKZ1afDmwN

This led to a flurry of replies from the deaf community, sharing their frustration with his comment.

Coronavirus impact on the Deaf and hard of hearing

According to the Deaf health charity SignHealth, more than 1 in 3 deaf people say the pandemic has had a major negative impact on their mental health. Additionally, the report claims that “78 percent of deaf people found coronavirus information shared by the government to be either partly or completely inaccessible.”

Deaf organizations like the Royal Association for Deaf People and SignHealth have been instrumental in providing BSL video translations of government briefings and coronavirus announcements. But this is a responsibility that should come from the government and not passed onto broadcasters or deaf organizations. 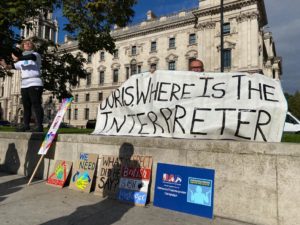 Stewart-Taylor and fellow activist Mark Hodgson completed a 200-mile trek on October 16 from Gloucester to London, UK. Their goal was to raise awareness and understanding of the importance of BSL interpreters being present for live government broadcasts.

Upon arrival in London, Stewart-Taylor met lots of deaf campaigners and organizations. They marched to 10 Downing Street and stood outside the gates with their banners. All events were filmed on livestream. During the march, powerful speeches were made by representatives of deaf organizations, as well as Stewart-Taylor who declared, “We are not invisible; we are still here,” and “Sign language can save lives!”

Deaf people also wrote 1,197 letters urging the Prime Minister to take action. They had hoped to deliver these letters in person but due to COVID, they posted them to Downing Street from a nearby post office.

Another goal of the walk was to raise £20,000 for legal action by discrimination and equality experts. Led by Fry Law, they’re pursuing a potential judicial review of the government’s refusal to provide an interpreter at the briefings, which they say has breached the Equality Act, the Human Rights Act, and the UN disability convention. 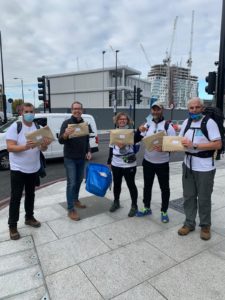 Do you live in the UK?

Residents are encouraged to write to the Prime Minister about how the lack of accessibility in COVID briefings are affecting them, and why it is important to have a BSL interpreter present.