“Our hearing doesn’t weaken, but something silent in us strengthens.”

Such is one of the messages within the poetic pages of Ilya Kaminsky’s parable, “Deaf Republic,” which tells the story of one town that goes silent during a time of political unrest. 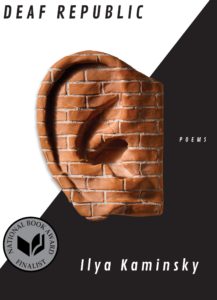 The story opens with noise, as the townspeople flock to the piano music from a puppet show. Suddenly, the town is silenced when a military raid leaves a deaf boy dead. The sound of the gunshot becomes the last thing the citizens hear, and they vow to honor their community and the boy through sign language and silence.

In the dramatic scenes, Kaminsky, who became hard of hearing himself at age four after falling ill with mumps, shows the value of language and silence in the world of his characters and his readers.

Themes of deafness come up numerous times throughout the collection, showing the various perspectives on hearing loss that ranges from the extreme to the delicate. The occupying military personnel describe Deafness as a “contagious disease,” while the townspeople unite behind the silence as “deafness is (their) only barricade.”

Kaminsky challenges the way language is used throughout the book, through the physical white space and line breaks and the carefully crafted words.

“Be courageous, we say, but no one

is courageous, as a sound we do not hear

lifts the birds off the water.”

He also writes of the joys of silence, and how the people who are deaf find peace during the time of crisis, and of not being able to hear.

“I am not deaf

I simply told the world

To shut off its crazy music for a while.”

While “Deaf Republic” tells the story of various townspeople, it is a love story and a dramatic warning. There are numerous lessons in this short story, as it showcases the values that the hearing and non-hearing have toward oral language, and how it’s important to understand how communication varies among us.

“… the deaf have something to tell that not even they can hear.”

As the story ends, the author sends a reminder about silence.

“ON SILENCE: The deaf don’t believe in silence. Silence is the invention of the hearing.”

Did you read the book? What did you think?

Love to read? Join the HearingLikeMe Book Club! To participate in the book club,  simply read the chosen book of the month, then join the conversation on Instagram and the HLM Facebook community. If you’d like to be part of a closer discussion, you can also apply to be a Phonak hEARo.