Before Beth Weller she discovered the rugby, she hadn’t interacted with other people who had hearing loss.

Beth Weller, deaf rugby player, was born 25 weeks premature. Despite this, her hearing loss wasn’t diagnosed for quite some time. Her mother was told that Weller’s issues were due to colds and ill health. She insisted on test after test. Weller wasn’t a sickly child and always struggled in school.

“Often, I wouldn’t know what was going on, have difficulty keeping up with lessons, and would struggle to stay awake,” she says. “I’d get labelled as lazy and naughty because the teachers put it down to a lack of trying, rather than not being able to understand what was going on in the lesson.”

Finally, at the age of eleven, an audiologist at last picked up the problem.

“It wasn’t until a lady called Sue sat me down when I was 11 and said, ‘You have a rare hearing loss called a cookie bite,'” Weller says. “I still have the colored-in audiogram with cartoon sketches to show the range of decibels and different sounds and area that was missing, which was in the mid-frequency range.”

Although her hearing loss was diagnosed as mild, the real issue lay in the gaps of hearing. The gaps were phonetics and the decibel range where speech happens. This gradually began to get worse as the years passed.

“Any background noise like in a school setting I’d struggle to hear what was being said by teachers and my classmates,” says Weller. “So, like many deaf children in mainstream schools I was quite isolated and had difficulty making friends.”

The problems increased and became worse in high school. During this time Weller found that there was little support and understanding. “The school’s policy on paper was to provide the correct support but not feel singled out,” she says. “Their plan of action was to put my desk right out in front, connecting it to the teacher’s desk at the front. With all eyes on me, it only amplified the feeling of being different.”

It wasn’t until university that Weller began to truly feel supported as a person with hearing loss.

At this time, Weller discovered deaf rugby, in particular England Deaf Rugby. “I became involved with England Deaf whilst at university,” Weller says. “One of the men’s 1stXV rugby players who also has a hearing loss mentioned that they were recruiting for hard of hearing/deaf female players and I should go to the next training session.”

Having gone to a training session at Old Albanians Rugby football Club (RFC), Weller found herself hooked. This was the first time in her life that she had interacted with others with hearing loss. And all shared a love of rugby. “It took a while to get going but, the women’s team eventually played our first match at Cardiff Arms Park,” she remembers. “Pulling on the jersey for the first time was a special moment and one that I won’t forget.”

The women’s team has been fixtures for several years now, becoming Deaf7 ‘s champions in Sydney, Australia last year at the World Deaf7’s. This is a championship event with both men’s and women’s deaf teams coming together from around the world. They each compete to be crowned World Deaf Champions. 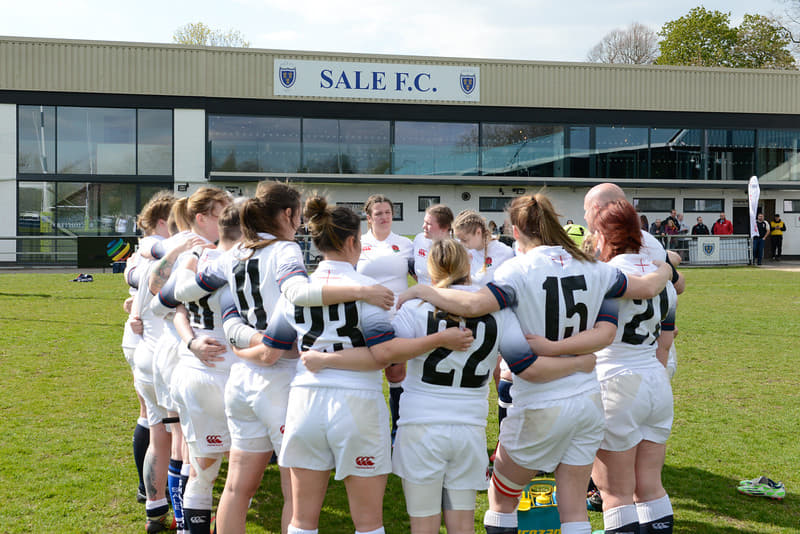 “I didn’t make the cut for England and ended up playing for Australia,” says Weller. “I had originally gone out to play for a Barbarians’ side, but it fell through two days before the tournament kicked off. One of the administrators emailed me saying that the remaining Barbarians left could join up with the Australians.”

Weller went out that day wearing the coveted gold jersey and played against her own teammates. This was both an amazing and bizarre experience.

“The tournament was also memorable, as my fiancé who flew with me to Sydney surprised me by proposing during the fortnight we were there,” she says.

During this time Weller met competitors from all around the globe. In meeting others with hearing loss, she also became part of a much wider deaf community.

“Having a hearing impairment or being Deaf can be isolating at times,” she says. “I’ve found playing sport with others who share the same disability has helped build up a support network of friends and given me a newfound sense of confidence.”

“I’ve found playing sport with others who share the same disability has helped build up a support network of friends and given me a newfound sense of confidence.” 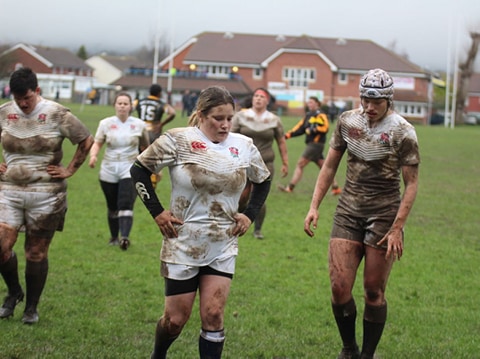 Jodie Ounsley pictured on the right of Beth Weller

Weller has also found personal inspiration in one of her own teammates. Jodie Ounsley has become an established deaf athlete signing for the England Women’s 7s, ahead of the 2020 Olympics. Ounsley was Young Deaf Sports Personality of the year in 2018 and was formerly a sprinter.

“She’s just one example of how having a hearing loss or being Deaf should never prevent you from pursuing your ambitions of achieving in hearing or deaf sports at the highest level,” says Weller.

Read more: How we started a deaf rugby team in South Africa

Weller has reason enough to be pleased with her own achievements. She has been offered a place on the forthcoming tour of South Africa next year but ended up having to pull out of the upcoming tour due to an injury.

“Being a member of England Deaf Rugby has been one of the best things that has happened to me,” she says. “I’ve worn the rose and made some wonderful friends along the way and I’m looking forward to what the future holds. My ambitions for this season, after having reconstructive surgery last year, is to keep pushing for a starting place.”