For the first time, “Stories from the Stage,” a television series from PBS, WORLD Channel and GBH that invites storytellers from around the world to share extraordinary tales of what it means to be human, aired a story in American Sign Language (ASL).

The ASL broadcast was part of the 100th episode of the WORLD channel storytelling series. The show has diverse people around the country telling personal stories of fears overcome, lessons learned, and challenges met.

The Story of Being a “GODA,” a Grandchild of Deaf Adults

The ASL story aired on April 25. It featured Brandon Kazen-Maddox (they/them), a Brooklynite, BIPOC, nonbinary, Grandchild of Deaf Adults (GODA), who does a lot to bridge the gap between the Deaf and hearing worlds. In the story, they talked about an experience with their Deaf grandmother.

Growing up with Deaf grandparents, seven Deaf adults, and six CODAs, Kazen-Maddox’s first language was ASL. Their first word was the concept for “moon” in ASL. It wasn’t until Kazen-Maddox was in college that they learned about what a CODA (Child of Deaf Adults) is. They related to that title. Later, they learned that they were a “GODA,” as their closest relatives who are Deaf are their grandparents.

ASL “Stories From the Stage” 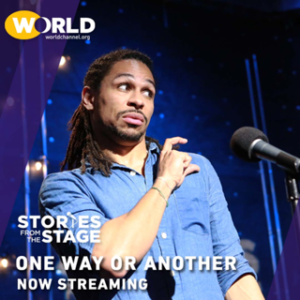 On the show, Kazen-Maddox talked about when they were 15-and-a-half years old and asked their grandmother if they could drive home from the store.  When she agreed, they took all the proper precautions, like checking the mirrors and putting their seatbelts on. Then they did what many signers do when driving in the dark and still wanting to talk – turned a light on inside the car. This resulted in a police officer pulling them over.

Even though Kazen-Maddox is hearing, it was a scary experience. They were trying to interpret for their grandmother while also letting the officers know why the light was on. When the officer still did not understand, the two obliged by turning off the light. After the officer drove out of view, the grandmother turned the light back on.

“My grandma is a strong woman and helped me understand that the rules are not always made to consider the well-being, comfort, or access to everyone to whom they apply,” Kazen-Maddox said.

According to Paticia Alvarado Nunez, co-creator of “Stories from the Stage,” Kazen-Maddox’s story showed how some “rules” are created without certain groups of people in mind. Whether a person is Deaf, BIPOC, LGBTQIA, or a different religion, there is almost always someone being overlooked whenever rules or guidelines are put in place. Although there is no law against having your car lights on, Kazen-Maddox and their grandmother are not the first to have such an experience.

“Whether a person is Deaf, BIPOC, LGBTQIA, or a different religion, there is almost always someone being overlooked whenever rules or guidelines are put in place.”

Changing Perspectives Beyond the ASL Story

Over the years Kazen-Maddox has worked to shift people’s perspective on things, including what Deaf people are capable of. They have worked alongside many Deaf artist through theater, music, film, television, opera, and dance.

“I strive for an ever-expanding perspective, and working alongside my Deaf/HH and Disability community provides me a vast ocean of brilliant and new perspective with every project I take on,” they said.

Kazen-Maddox is currently working on the first of five films connected with their non-profit organization Up Until Now Collective, titled “SOUL(SIGNS): An ASL playlist.” They’re also working on “SOUL(SIGNS): OPERA” films. “Each of these ASL film projects are in services to a larger project, which is my ASL Dance Theatre Reimagining of Andrew Lippa’s WILD PARTY,” Kazen-Maddox said. “This project is a culmination of my life’s work, which includes a full cast of Deaf performers whose voices are represented by live musical instruments, ASL, dance and subtitles.”

The goal of “Stories from the Stage” is all about changing perspectives, which Kazen-Maddox’ story accomplished. “It’s impossible to fear or hate someone who is very different from you when you see them up on stage and hear their story,” Alvarado Núñez said. “‘Stories from the Stage’ is about celebrating our differences rather than simply tolerating or comprehending them.”

Read more: An interview with a signing NYPD officer

Where to Submit and Watch

Alvarado Núñez invites people to subscribe to the “Stories from the Stage” newsletter. Interested participants can submit their story at worldchannel.org. They can be followed on social media: @worldchannel and #storiesfromthestage.

Kazen-Maddox’s story can be viewed on worldchannel.org, the PBS app, and numerous streaming platforms.