Marvel’s “Eternals” is being released in November, with the first deaf superhero played by Lauren Ridloff. The actress recently spoke about the movie. She said we need more inclusive films to inspire disabled communities around the world. 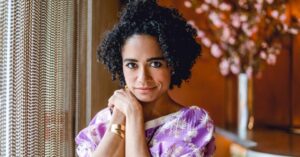 If you watched “The Sound of Metal,” you might recall the gentle smile of Lauren Ridloff as the school teacher who appears in the second half. She’s undergone a transformation since then. Ridloff has been training, after all, to play a radically reimagined Makkari. She’s a super fast superhero who happens to be a deaf woman of color. Unusual on every count.

Heroes for the Worldwide Deaf Community

At a recent panel discussion, Ridloff talked passionately about the scale of awareness that the “Eternals” will generate.

“It’s going to make a massive impact,” she said. “The MCU has a global audience, and I can’t even start to imagine how this is going to affect other communities throughout the world.”

As is the case for many of us, Ridloff searched for inspirational characters in books and films while growing up. She looked for deaf characters who overcame the impossible to carve their own identity. This search would seem fruitless if things weren’t finally beginning to change. We are seeing more deaf actors in major roles across television series and films.

Ridloff said she looks forward to more deaf creators in Hollywood – both on and off screen – who unravel the deaf experience in a more nuanced way. In other words, not stories that focus only on the hearing loss, but those that have layers, dig deeper, and reveal personality.

The Marvel Cinematic Universe has come a long way since the ’70s, when the original Makkari was sketched as a beefy white male. The superheroes we see on screen today are from diverse backgrounds. They challenge stereotypes and consciously address the inclusivity that was for long missing in popular fiction. For a change, we are now seeing superheroes with disabilities, superheroes who are Asian, and even an LGBTQ+ superhero.

Besides Ridloff as Makkari, there’s another deaf superhero joining her. A deaf, Native American superhero called Echo (a.k.a Maya Lopez). She is a spin-off on Hawkeye, who’s also seen experiencing hearing loss. The character will be played by a deaf Native American actress named Alaqua Cox.

What could be better than two deaf superheroes? A universe that represents disability as a multitude of superb abilities.